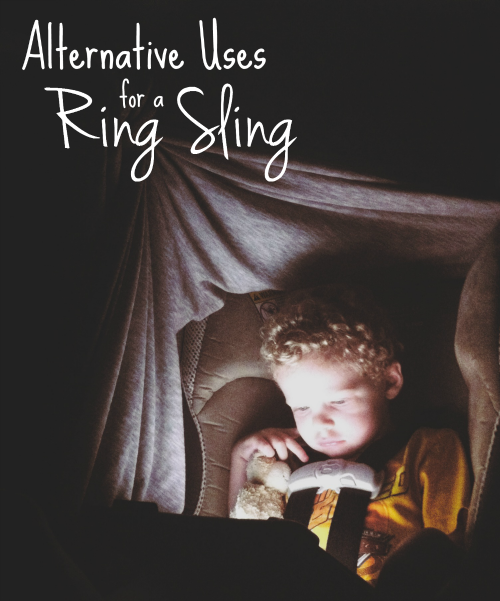 Did you know that there are ways you can use your ring sling OTHER than just to lug around your kid???

My #1 favorite use for my ring sling, other than carting around “the beast,” aka Bryce, was born out of a moment of sheer panic and frustration. 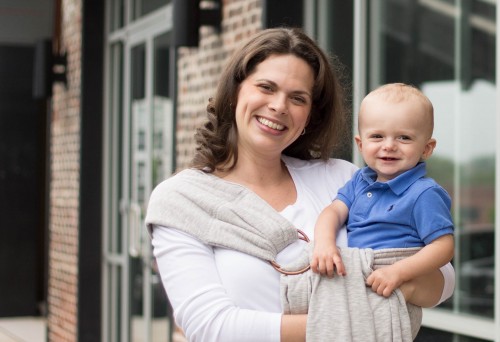 He was still manageable when this was taken.

Road trips have always been extremely painful. With 2 small kids most of these trips leave me never wanting to go out of town EVER AGAIN! This last trip Eric and I wanted to punch each other. Seriously. I don’t know what it is about a whining child that can make two people turn on each other. We had a little over an hour left before getting home and I sat in the passenger seat with my eyes glazed over fantasizing about opening my car door and just rolling out onto the side of the highway like bailing from a runaway train! Both kids were whining/wailing from the backseat and I was now car sick from constantly turning around to try and keep them happy, which obviously wasn’t working. At this point in the trip I was out of all of my tricks, I had even used the awesome one I am about to share with you, but sometimes no matter what you do they just can’t be pleased.

Even though Bryce is way too big for me to want to wear him I still keep my sling in the car.

It makes an AWESOME sun shade for long trips!!

I take the end of the sling with the rings and feed it through the handle on the roof by the back seat door. You know, the “oh shit” handle. 🙂

Then I feed the fabric into the rings and pull until its tight! You can open up the fabric and tuck it between the carseat and the head rest and voila! One less reason your kids can fuss. I had used baby blankets and such until one trip Noah was driving me crazy whining and crying about the sun in his eyes. As soon as I tucked a blanket up there he couldn’t resist the urge to yank on it and then he would start crying again. The sling was laying in between the two seats and I was driven to the brink of insanity, which apparently is when parents truly tap into our endless well of creativity!!

Best of all it made an awesome tent which even once it got dark Noah absolutely loved and wouldn’t let us take it down!! 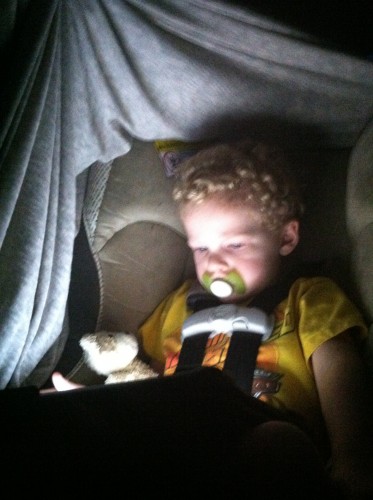 My other favorite use for a ring sling was a nursing cover.

All of that fabric made it SUPER easy to keep everything modestly tucked away when nursing in public. I always felt much better knowing that poor innocent bystanders wouldn’t have to witness my pale flabby belly as Bryce enjoyed his mid day snack!!

Have you found any other creative uses for your ring sling?? Please share in the comments below!!