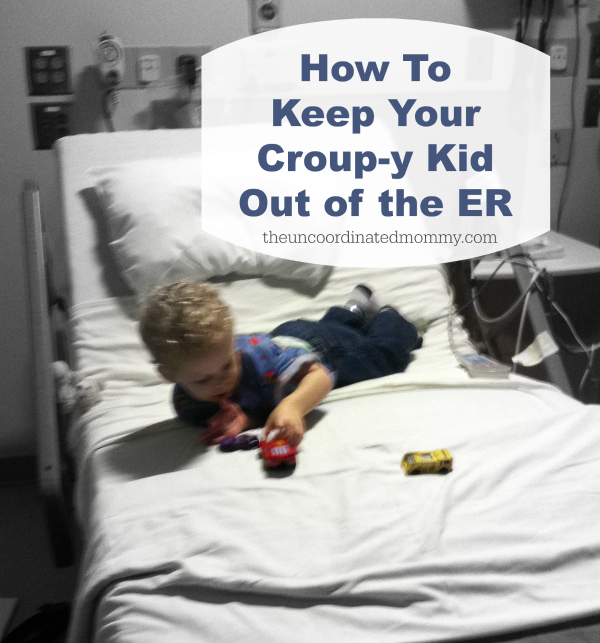 If anyone tells you there is not a medicine for croup, they are wrong!! When Noah came down with croup a few years ago I did what I normally do and hit the internet looking everything up. This served me very well when he had Hand, Foot, Mouth disease but somewhat failed me with croup. Everything I read said that you just had to let croup run it’s course. There were home remedies for croup but otherwise you just needed to monitor and make sure they did not go into respiratory distress. Wouldn’t you know it, Noah went into respiratory distress. It wasn’t a “OMG he stopped breathing call 911” kind of thing though. Croup is a very noisy illness they can have a raspy voice and it can be accompanied by stridor, which is an audible, whistling type of breathing.

Here is a precious video of Noah when he was 2 and had croup. His voice was horse and you could hear the whistling when he breathed. Respiratory distress can be determined by a see-saw motion of their chest and stomach when breathing, this indicates labored breathing.

Let me stop right here and remind you that I AM NOT A DOCTOR. I am simply relaying my own experience. Breathing problems are SERIOUS and SCARY. You should ALWAYS call your doctor.

And I did call my doctor and once I described the labored breathing they said that I needed to bring him to the office right away. When we got there they gave him two breathing treatments, but he wasn’t showing any signs of improvement so they sent us to the ER at Children’s Healthcare of Atlanta, which was luckily right across the street. There he received a stronger breathing treatment that they couldn’t give him in the doctors office and a steroid. After monitoring him for an hour they decided he needed another breathing treatment. At that point it was pretty late at night and protocall requires they monitor him for a certain period after these treatments. That meant we earned a bed upstairs on the respiratory floor. 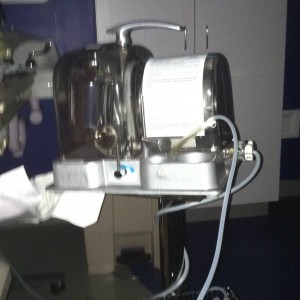 Oh, and I forgot to mention that during all of this I am toting around my 5 month old Bryce who was at various points attached to my boob while I am discussing all this with doctors and trying to comfort Noah. This is what happens when you have no family in town. 🙁 Eric came over as soon as we were sent to the ER but sick children and nursing children generally just want Mommy. Once we were taken to Noah’s room on the respiratory floor I walked past two doors with signs displaying RSV and immediately sent Eric home with Bryce. I did NOT want him exposed to all of this at only 5 months. The wonderful nurses brought me this bad boy to pump with through out the evening and night and refrigerated my milk for me.

The craziest part of all of this was that I had been at the doctors office earlier in the week for Bryce’s check up. Noah was already showing croup symptoms and I had the nurse look at him and asked if there was anything they could do for him. She relayed all the home remedies for symptoms, steamy shower, cold night air etc and warned that the second night would be worse. Thankfully she did tell me what warning signs to look for, the labored breathing. What she didn’t mention is that steroids are an effective treatment for children with croup! I found that out a month later when having switched doctors for a multitude of reasons I brought Bryce, now 6 months old, in with a croupy cough and high fever. My new doctor recommended a steroid and after giving it to Bryce it was like he wasn’t even sick. No horrible second night and no visits to the ER!!

If our previous doctor had told us then, or even been aware of it, it could have saved us so much trouble! We likely wouldn’t have had to even have breathing treatments. I just wish this were more widely known!! The wonderful article I linked to above is on WebMD, but when you look at their info on croup there isn’t a link to it. They do mention that a steroid could help, but only if the child has severe croup symptoms. The article tells so much more. The way I found the article was by searching “croup and steroid treatments” on google and that’s only because I already knew about it.

This week Noah woke up early Monday morning with a croupy cough and high fever. I called my doctors office and brought him in for a sick visit. My doctor did give me a prescription for a steroid but told me not to use it unless I heard the stridor sounds, the whistling breathing. This usually happens in the middle of the night so he wanted me to have it just in case. We don’t want to give our children steroids if it’s not necessary. Perry Klass, MD makes an excellent point in the WebMD article though.

“A case of croup that is seen by the doctor as reassuringly mild can nevertheless mean sleepless nights, anxiety, and misery for the whole family,” [Perry Klass, MD] writes. “That’s still no reason to offer an intervention that doesn’t actually help, but it’s an excellent reason to offer one that shortens the illness and helps everyone get a better night’s sleep.”