Today I took the boys to the Atlanta Boat Show! We had such a great time! The show is being held at the Georgia World Congress Center downtown, adjacent to the Georgia Dome, from Thursday January 9th thru Sunday January 12th. Tickets are $15 dollars and kids under 15 are free! Click on the link above for more details.

I will admit that my first thought when I was offered tickets to the show was that we aren’t really in the market for a boat. But at my husbands urging I read further and realized all the family activities they had for kids. Once I saw that Noah would get a chance to touch a baby alligator and fish for live trout I was sold!

After picking the boys up from preschool we headed down to the Georgia World Congress Center. Eric works right next to it so we were able to park in his lot, but there is plenty of parking all around the GWCC. I grabbed our Baby Jogger and off we went.

As soon as we entered the GWCC there were boats lined up in the entrance hall. And I mean big boats! There was a HUGE sailboat with a mast that reached at least 30 to 40 feet in the air. Noah was sufficiently impressed.

Once we entered the show we were blinded by the hundreds of shiny boats and bright lights in the massive room. There was so much to look at and take in that Bryce sat in the front seat of the stroller and did not whine to get up the entire time we were there! And we were there for 2 hours! 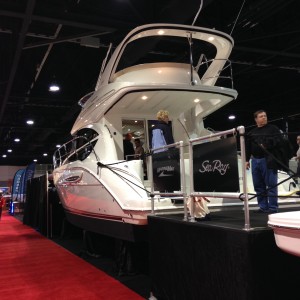 After making a lap around the room and admiring some pretty amazing boats, they had everything from pontoons to luxury yachts ranging in length from 9 feet to more than 5o feet, we headed over to the Swampmaster Gator Show. 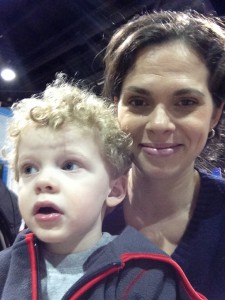 The show, by Jeff Quattrocchi, was great! He started off educating us about alligators in general and then explained where he gets his gators from and how they are used. If you are an animal lover you will be happy to know that his gators are purchased from either alligator farms where they would otherwise be killed and made into shoes and steaks or from nuisance trappers who have been ordered to trap the alligator and kill it because it has become a danger to people. This generally happens because people feed them. So if you ever go to Florida DO NOT feed the gators. 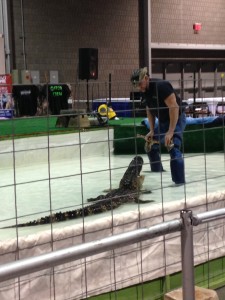 He also explained that each gator is used in the show for only 5 days and then it is released into a private lake to live out the rest of it’s life. He did concede that this was not only for the gators well being but also for his. Once the gator realizes Jeff is not going to hurt it, it can become even more aggressive. Either way the gator definitely wins in this case. Considering I was born and raised in Florida and have had a couple run ins with some pretty big alligators I really enjoyed the show. The boys did too!

Noah was able to pet one of the baby gators. 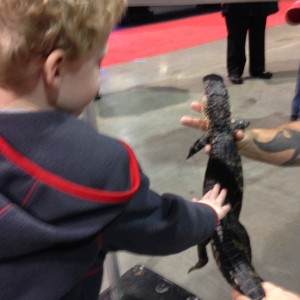 And I got to hold one! It was pretty awesome. 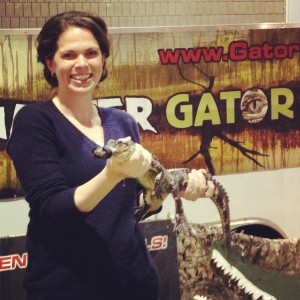 As you can tell his mouth was taped shut and since my Mom, the Turkey Hunter Phd, has a picture holding an alligator I knew I couldn’t chicken out. 😉 Ironically while I was searching her facebook photos, of which there are like a million, I found many many photos of her with turkeys and even a few fish before FINALLY finding this photo. Ha ha, no photos of her with a snake though. 😉 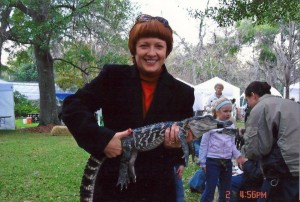 After the gator show we walked around and checked out all the exhibitors. They were all so nice. As soon as they would see the boys in the stroller they would beckon me over and give them some little thing or other.

There was a huge aquarium which Noah stared at for probably five whole minutes. That’s like hours in toddler time! 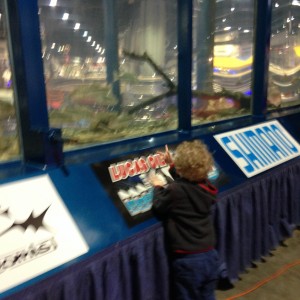 They also had the Let’s Go Fishing Center nearby, which was a small catch and release trout pond. Noah had a blast! He even caught his first fish! Actually he caught two. It took a little while but I swear he could have stayed there all day. 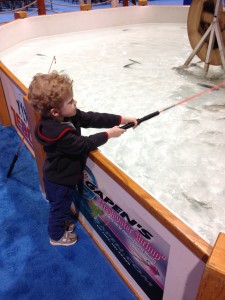 If you notice you aren’t getting many bites ask the gentleman if he can put a new color lure on your line. I think those fish are pretty smart, you have to stay ahead of them. You know, mix it up a little! LOL It definitely worked for us. As soon as he did we caught three in a row. 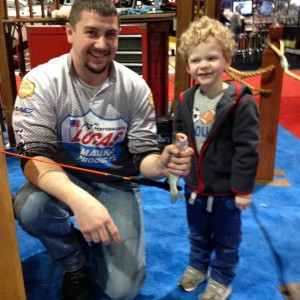 All in all, we had a great time. There was plenty of good food (Jim and Nicks and Chick-fil-a to name a few) and everywhere we went took a credit card. There was even another thing for kids nearby called the Rockin’ Rollin’ Bubbles, but the boys were definitely too young for that. Secretly I wanted to get in one but I’m sure I would have totally busted my butt! 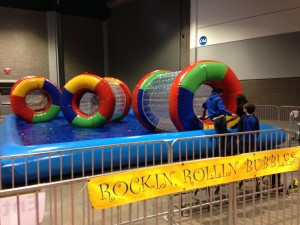 That and they would probably make me take off my boots and I had some pretty funky socks, purple and lime green, that did NOT match my neon orange pants. Keep in mind that to walk on a lot of the boats you have to take your shoes off. Since I had the boys in the stroller I didn’t board any of the boats, but if you plan to you might want to consider what socks you wear. Preferably ones without holes! LOL

A special thank you to the wonderful people behind the scenes at the Atlanta Boat Show for providing my family with tickets and working so hard to put together an awesome event with the kiddies in mind.

This giveaway is a little different from most on here because it will only be open for 24 hours, ending at midnight tonight, Friday January 10th! The show only goes through Sunday and I want to make sure the winner can get the tickets by Saturday morning. The winner will be able to pick up their tickets at will call Saturday morning.