I did it!! I beat last years Week In My Life. Turns out I only posted up till Day 2, but after rereading how busy I was 1 year ago I can completely understand why I didn’t continue. 🙂

Wednesdays tend to be pretty chill days. This morning Bryce woke up at 7 and I really didn’t want to even think about getting up, so I fed him, like I usually do in the mornings and then put him back to bed. This meant I could go back to bed too! You might be thinking hey that’s awesome. And it is! I was able to sleep till 9:00! o_O However, there is a price to pay. I rarely do this because when I do he gets off his schedule and can be VERY fussy.

But I did and honestly the extra sleep was worth it. Noah woke up around 8:30 and lay in my bed playing with my phone until I woke up and decided we needed to stop being lazy bums. Eric was still at home because he was feeling sick and was going to see the nurse at the Walgreen’s clinic. It was a very different Wednesday. I decided to let Bryce keep sleeping while I got dressed. I had a board meeting for the kids preschool, so I knew there wouldn’t be much chance in him getting a morning nap. I dressed Noah and then woke Bryce, who was super cranky, and got him dressed as well. We grabbed a super late breakfast downstairs while I tried to pack a quick lunch for the boys since they would be with their classes during lunch while i was in the meeting.

I was trying to leave with enough time to stop by Starbucks and get a pumpkin spice latte, yum, and still get to the school with enough time to drop the boys off. While putting Bryce in the car Noah was rummaging in boxes in the garage and walked up with an outstretched hand asking if he could take “him” to school with him. As he got closer I about had a heart attack before I realized the giant caterpillar in his hand was one of the plastic bugs I bought for the favor bags for Bryce’s Zoo Animal birthday party. The irony is I placed the giant caterpillar and an ant in the garage to try to freak Eric out. Yeah, so that back fired.

We finally get in the car and I crank it up and wouldn’t you know it, my gas lights on. I decided that I still needed coffee so as long as there wasn’t a line we were still going. I noticed as we drove by that Eric’s jeep was still outside the walgreens so after getting my PSL (pumpkin spice latte, thanks Aubrey!) we stopped by and left a “Get Well Soon” note on the back of a Toys R’ Us receipt under his windshield wiper. We managed to make it to the school with enough time to drop of the boys and make the meeting on time! Yay!

After the meeting I picked up the boys and we headed to Party City. We had been searching for this Buzz Lightyear Halloween costume for a few weeks now. But it was either too big or I was having trouble figuring out what I was ordering online. Something I didn’t know was that different Party Citys carry different costumes. While the first one I went to didn’t have the Buzz Lightyear toddler costume, the second one did!! I’m so happy I randomly decided to stop by! As we entered I was having to reassure Noah every few steps that all the freaky Halloween crap wasn’t actually scary or real. I am really starting to hate Halloween. We found the Buzz costume and checked to make sure it fit and thankfully it did. Noah has been asking for his Buzz costume for weeks! I totally thought I had a few more years before he figured all this out and started caring!!

After we found the costume we ran to back of the store so I could use the bathroom which entailed wedging Bryce’s stroller in the bathroom and yelling at Noah not to touch ANYTHING a half million times. Then we took a stroll down the party aisle to figure out what type of birthday party Noah wants to have. He’s turning 3 in December! We narrowed it down to Toy Story (shocker), Sesame Street, and Thomas the Train. After waiting in line we made it to the cashier only to realize that my 25% off coupon was off $60 not $50. I knew I wanted to get a few little things for Noah and I to wear so I decided to run back across the store to the costume aisle and pick up hats etc. A minor meltdown ensued because we were leaving “Buzz” behind but he was happy when I let him pick out our costumes. At first he wanted Daddy to be Mickey, but with a little redirection he decided Daddy could be a pirate. 🙂 Jake to be exact. LOL I however get to be Jessie from Toy Story. This means I have a cute cowboy hat and a bandana. Eric gets a pirate hat, eye patch and a sword. I swear I did not influence his decisions in the slightest. 😉

After grabbing the additional accessories we headed back to the registers to wait in line again. Luckily it was relatively small because when we made it to the front I realized I left my credit card in the car. Seriously. We ran outside and quickly grabbed the card and ran back inside. Once again there was a minor meltdown for leaving “Buzz” behind.

FINALLY we checked out got in the car and headed home. Of course we got stuck in road construction traffic for 10 minutes and Bryce screamed the whole time because it was passed his nap time. Fun.

Of course once we got home Noah wanted to try on his costume. So after putting Bryce down I let him put it on and play for a while. He was thrilled!! 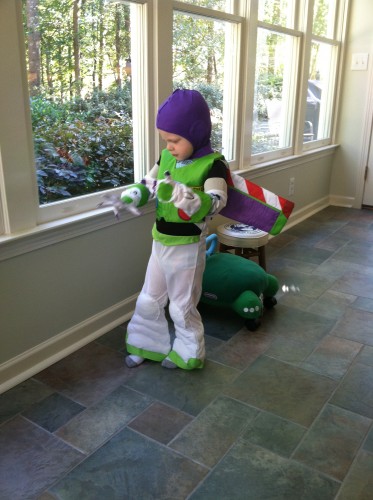 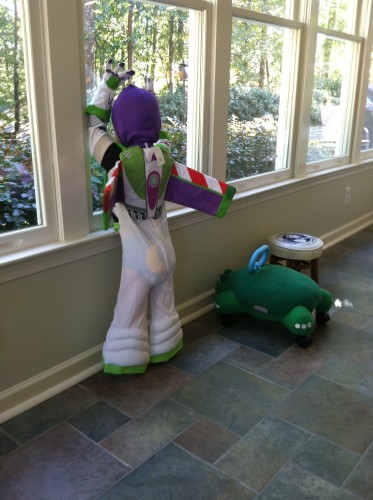 As the boys napped I got some work done, cleaned the kitchen and tried to do a little unpacking. The boys woke up and played and once Eric made it home we ate dinner. I made an awesome dinner! I guess I was trying to make up for the frozen pizza etc, but regardless, we had Sausage and Peppers with Crispy Polenta. It was awesome! And I highly recommend this recipe. I did however replace the Italian sausage with regular sausage or kielbasa because I am not a fan of all the fennel in Italian sausage.

Tonight was a little different than usual because the first game of the World Series was on and Eric (and I of course) are huge Red Sox fans. Of course we are both from the south, but apparently Eric’s first little league team was the Red Sox and he has been a serious fan ever since. 🙂 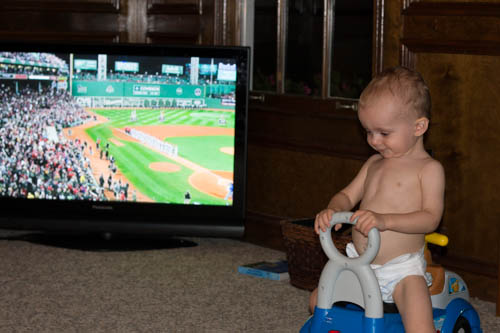 This was Noah during the entire national anthem. I was so proud. 🙂 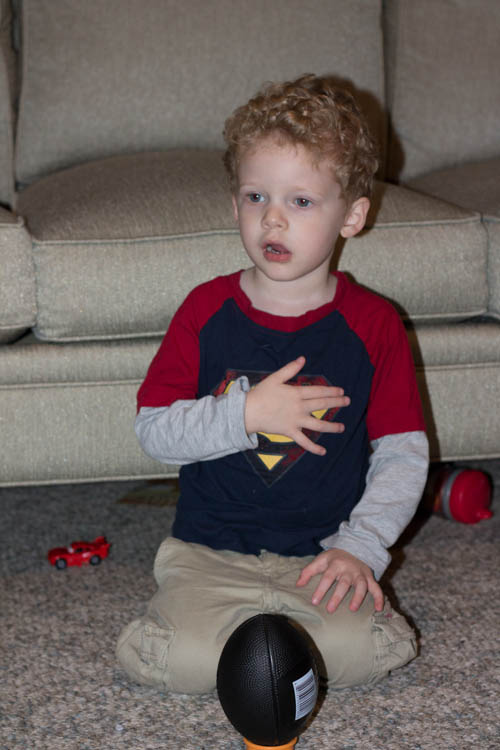 Eric tried to watch the game and the boys ran a muck through out the living room with me following them about with my camera. Eric was not amused. 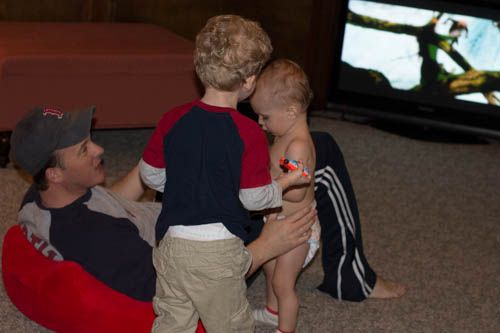 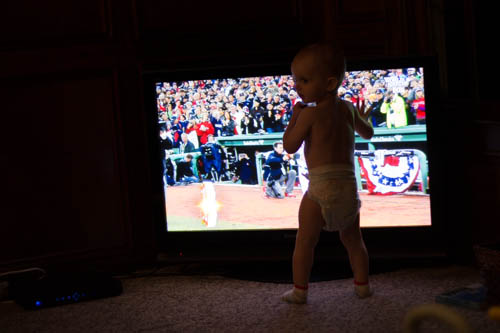 I finally conceded and took Bryce up to take a bath and put to bed so that Eric could watch the game in piece. After getting him down I gathered Noah and brought him upstairs for his bath and to get ready for bed. He was quite entertaining. 🙂 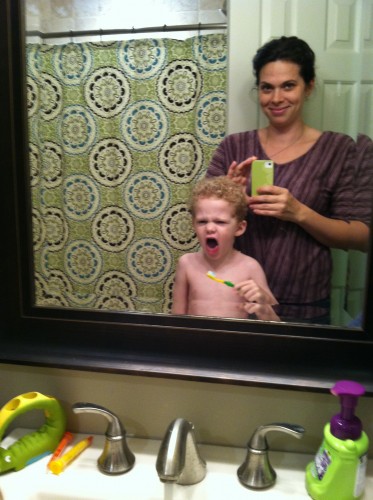 No night in our household in complete without some form of potty training. But luckily Noah went potty!! 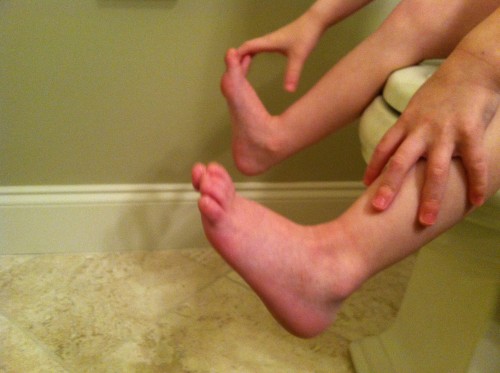 Yay! I made a HUGE deal out of it. We had a little dance party upstairs and then went downstairs after he got his pj’s on and he got to pick his helicopter out of the potty bag and show daddy, who also made a huge deal. 🙂 It was great. So proud! 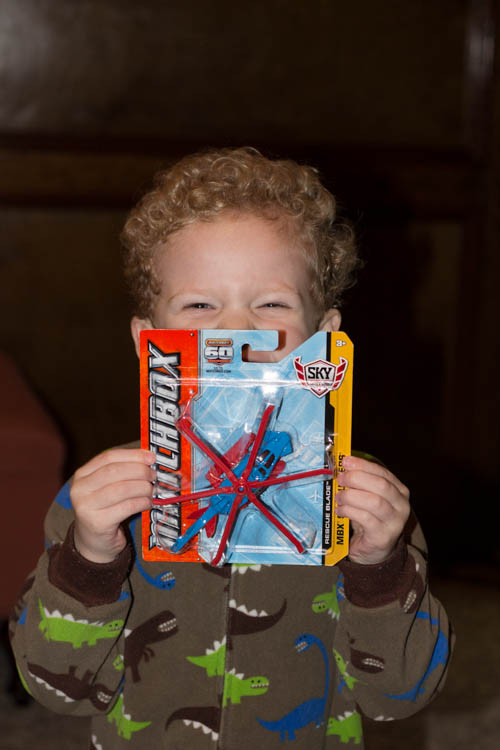 The boys were finally in bed and we settled down to watch the rest of the game and I enjoyed a little late night snack. Perfect end to a mostly perfect day. 🙂 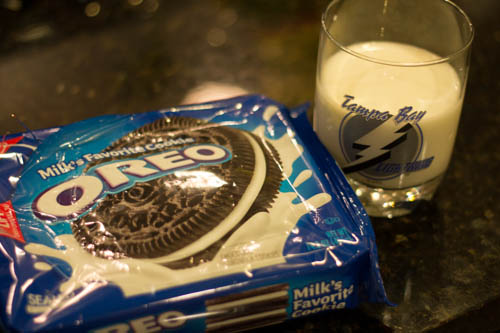