“I wrote this review while participating in a campaign for Mom Central Consulting on behalf of Wet Ones. I received free admission to Six Flags, attended an informational and complimentary luncheon, and received a gift bag and promotional item to thank me for taking the time to participate.”

Last Saturday Noah and I were lucky enough to join a bunch of bloggers, with Mom Central CEO Stacy DeBroff, for the Wet Ones event held at Six Flags! We had a blast! It was hot and a little humid, but that didn’t hold us back. We left Daddy and Bryce at home and headed to the park. 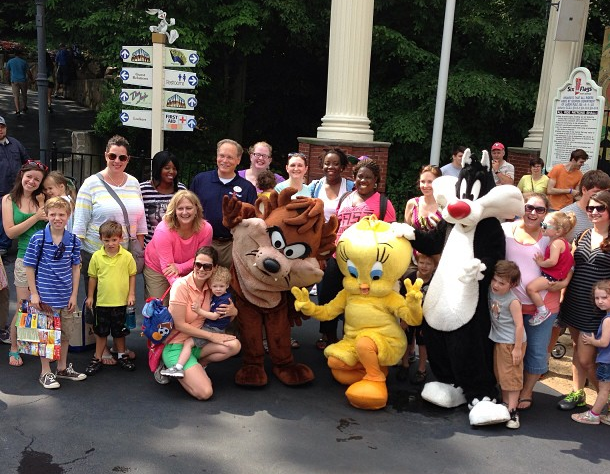 I was wondering if Noah was going to be able to go on any rides. I had nothing to worry about! There are actually three areas in the park for little kids! I’m pretty sure his favorite part was the train and the sky bucket. But, he was also able to be a tiny trucker and we even went on a boat ride through the Monster Mansion. The monster mansion started up with silly monsters which he loved, but then they got pretty dark and creepy. I just kept my voice light hearted and hid his eyes for the really scary ones. We had no tears though! 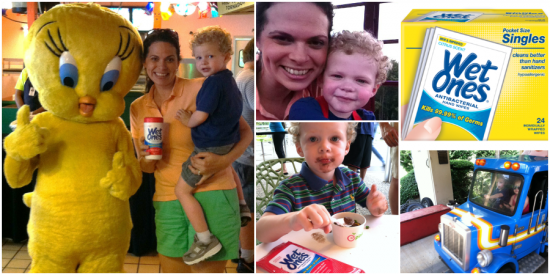 I am already a huge fan of Wet Ones and it’s easy to see why they have partnered with Six Flags. We learned that doorknobs and railings are some of the dirtiest surfaces that we touch, and just waiting in line for the sky ride I’m pretty sure Noah touched, hugged, and hung from every single inch of the railings. Luckily with my awesome Wet Ones gift bag I received I was not concerned at all, I just made sure he didn’t touch his face while we were waiting in line and as soon as we got in our little sky bucket I pulled out the wipes and cleaned him up! This was much better than fighting him the entire time we were waiting, trying to keep him from touching anything. Whew, toddler crisis averted thanks to Wet Ones!

I also learned that Wet Ones wipes are just as effective as gel hand sanitizers AND they actually wipe away dirt and germs and don’t dry out hands like alcohol based sanitizers do! We keep the 40 count canister in the car for general use and ESPECIALLY because we are potty training! I also keep a 15 count travel pack in each of boys backpacks. They come in so handy. After a trip to the bathroom with Noah and Bryce everyone gets wiped down with their own Wet Ones wipe. Between Noah having to touch the toilet now, and Bryce touching the changing table, and both of them touching me (yuck!) we are the poster family for Wet Ones.

I have two dirty little boys and I am just doing my best to keep them clean and healthy!