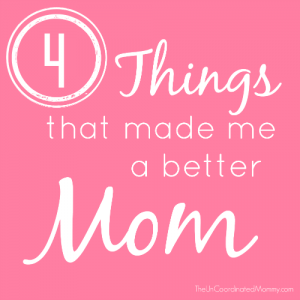 I made the decision in January to stop nursing Bryce. As a result of my post-partum depression, which I thought was mostly gone, I realized that I had been too weak to stop his night time feedings. That’s right, he was 16 months old and still waking up between 3 and 4 AM every night to eat. Add to it that Noah would wake up with a bad dream every couple of nights and I was getting NO sleep. I finally decided enough was enough and begged Eric to help me. I knew that if I went in to comfort Bryce in the middle of the night I would end up feeding him. So for 3 or 4 nights Eric was in charge and as a result Bryce started sleeping through the night. Hallelujah!! After a weeks worth of sleep I realized that if we had been more protective of my sleep we could have prevented a lot of the pain we went through these last 2 years. Hind-sight, could a’ would a’ should a’.

2. Know Your Limits and Priorities

This one is very similar to #1 above but a very different lesson learned. At the beginning of the year I was consumed with work for my client. The boys were both in school and I was constantly finding new ways to promote my new client through various social media channels. I was doing a pretty good job at balancing work with family. And then summer hit.

This was my first summer with both boys at home and very little camp. That meant that they were only in school for 4 weeks. OMG I thought this summer would never end. I also realized that I was taking on way too much with my work for my client. At least too much with the boys at home. We also realized that we were going to have to cut our budget back and that meant taking one of the boys out of school. With all of these changes afoot I knew that I was going to have to cut back on work. The boys have always been, and will continue to be my #1 priority. So that meant I had to quit working for my client. It was frustrating but freeing.

3. Be Strong and Roll With The Punches

Early in the year Bryce started showing the early warning signs of the terrible twos! Crap. He was/is a whirling dervish! He’s crazy. He has no fear and a tolerance for pain that he seems to have inherited from his grandfathers. He put us all to the test one early morning in June on the day of my brother in-laws wedding. He decided to lunge out of the hotel bed and before I could catch him bashed his head into the marble topped nightstand. By 8AM we were in the emergency room getting him stitched up. The nurses wrapped him in a sheet and while one nurse held his head, another held his legs, and I used every ounce of my strength to hold his chest down. In the beginning while the doctor cleaned his wound he just cried “Ow, ow, ow” over and over. Then somewhere in the middle of the stitches he decided he had had enough. He glared at us and just grunted with all his might trying to get out. He was so mad at us! One of the nurses commented, “Oh no! He’s going to hulk out on us!”

It was a crazy day but we all made it to the wedding on time and dressed to the nines. Oh, and did I mention all four of us were in the wedding?? Crazy I tell you!

4. You Can (Re)Learn Patience

This has been one of the most amazing things I have learned this year. I have struggled with patience ever since my children were born. Before kids I had an enormous amount of patience, after it was pretty much non-existent. Turns out the PPD and lack of sleep were HUGE contributors. Now that it’s mostly behind me I have been trying to tap into my former awesome self. 😉 Enter Love and Logic. It’s a parenting style that preaches logical consequences, which I totally can get behind, but most importantly Love, with a capital L. It has been essential to rebuilding my relationship with Noah and helping him stay calm when he gets frustrated. I could probably write a whole series of posts on this, and probably will, but take my word for it, it’s awesome!!

I am very greatful for all of the wonderful experiences I have had with my blog this year and all the wonderful brands that have wanted to work with me. This post is sponsored by the makers of Children’s Motrin. They asked for me to reflect on this year and what has helped make me an Unstoppable Mom. I finally OK with that term, because as I see nothin’s stopped me yet, I doubt I would win any mother of the year awards, but I’m still truckin’! LOL

Don’t forget that the makers of Children’s MOTRIN® are asking Moms to post their tips and tricks to the MOTRIN® Facebook page under each week’s Kelly Ripa question video and for every post, Children’s MOTRIN® will donate $1 to Safe Kids Worldwide, a global nonprofit that provides moms with the tips they need to help keep their children safe. Moms could even win weekly giveaways of $100 gift cards just for posting.*

*NO PURCHASE NECESSARY, OPEN TO LEGAL RESIDENTS OF THE 50 UNITED STATES & D.C., 18 AND OLDER. VOID WHERE PROHIBITED. Promotion ends 11:59p.m. ET 12/28/14. Sponsor will donate $1 for each approved Submission made as part of the promotion, with a minimum donation of $30,000 and a maximum donation of $50,000. For Official Rules, and complete details, visit www.unstoppablemoms.com. Sponsor: McNeil Consumer Healthcare Division of McNEIL-PPC, Inc. To learn more about Safe Kids Worldwide visit safekids.org.