My mother wears many hats. She has a PHD, but would never tell you, and also loves to turkey hunt!  She is also a favorite target of Mr. Murphy. You know as in Murphy’s law? So much so that my step-dad has nicknamed her Sitcom! I think he’s partially to blame too, but that’s a whole ‘nother story in it self. I might have to start a category on here just to share these stories, they are side-splittingly funny. But I digress. Not only is she funny, but she can write too! I recently had the idea to have her write something that I could share for y’all. I was trying to decide what to ask her to write and decided it should have something to do with our family. She has researched our family tree so extensively that if she ever decides to write it all down it would contain more volumes than the Encyclopedia Britannica! It is obvious that I get my love of history and genealogy from her. She was especially inspired by Mother’s Day recently and shared with me a wonderful story. I hope y’all enjoy it as much as I did!!

I’m amazed at the times when I find reflection, especially as it relates to those who have passed from my life.  This Mother’s Day, I had one of those moments.

My oldest daughter invited my husband and I to her home for Mother’s Day, along with another couple, our nephew and his wife.  When I asked what I could bring, she mentioned that it would be nice if I would bring the makings for one of my libations.  In other words, some sort of cocktail.

I am one of those who clips and saves recipes, and the pile is always growing because there isn’t enough time in the world to catch it up.  So I sifted through the pile, and I found an article about an old favorite that people were trying again.  They called it a “retro cocktail”.  It is a Tom Collins.

As I began gathering the ingredients, my mind began its journey.  The drink tugs at my memories about my own mother who is no longer with us.  We lived in a small town in north Florida, which was more a farming town at that time than anything else.  People lived simple lives; and it was the mid-1960s, when I was about ten years old.

My mom had just come back from visiting my aunts, who lived in Miami.  One aunt was quite wealthy, and her husband had joined the Playboy Club.  Mom came back with all kinds of new things, including blue eye shadow (no one in Monticello wore eye shadow), swizzle sticks from the Playboy Club, and a new drink called Tom Collins.  She said that it was what Aunt Debbie drank, and that she (mom) liked it.  This was very interesting to us, because mom didn’t drink at all.  She didn’t like beer.  She didn’t like wine, and who could blame her when all you could get in Monticello was some pretty bad wine at the time.  All the others were usually straight and on the rocks or mixed with either water or coke.  She said that she wasn’t going to drink something that she didn’t like, but she liked this drink called a Tom Collins.

She brought back the ingredients for the drink, and she made them for her and dad several times in the late afternoon until it ran out.  They always used the Playboy Club swizzle sticks, too.

Fast forward to 1971; and I’m in Tallahassee, Florida, with my soon to be husband.  He has taken me to the Skyline Lounge, and it was the first time I had ever been in a lounge.  I remember that I was underage, but no one asked for my id.  When the lady was taking orders, I kind of freaked because I had never ordered a drink before.  Like mom, I didn’t like beer, wine or the others.  So when she got to me, I ordered the only drink I knew.  I asked for a Tom Collins, and my boyfriend looked at me as if all of sudden he realized that maybe he didn’t know me as well as he thought he did.  The drink came, and it was a hit with all the other girls at the table.

So here I am today.  It is Mother’s Day, and my daughter and I will share a Tom Collins.  Happy Mother’s Day, Johnelle.  Thank you for all the wonderful memories. 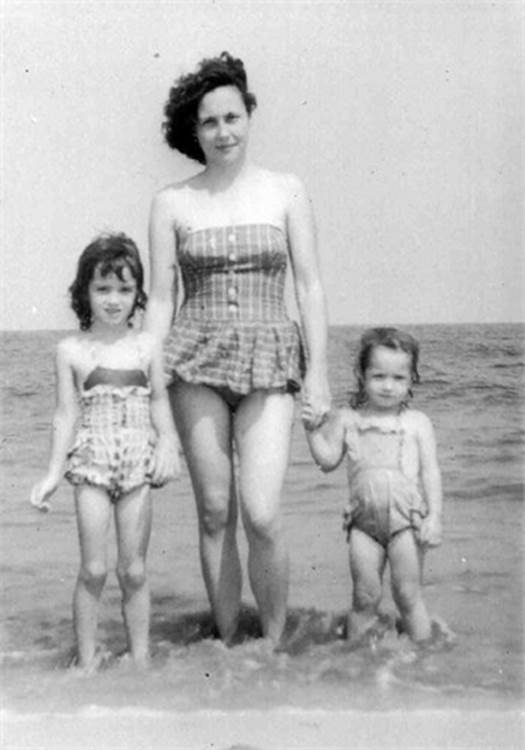 That’s my mom on the left with her knobby knees and wasn’t my grandmother gorgeous!?