This morning Noah and I went to Walmart and picked up a second potty, not a pretty pink one this time. 🙂 And some big boy underwear! He looks so cute in his little underwear. I can’t believe how big my little man is!! I also found this pretty cool travel toilet seat cover that allows him to use public toilets without falling in or touching the nasty rim. The downstairs potty now resides in his playroom and I put the travel seat cover on the downstairs toilet so that he can get used to using it. The pink potty is upstairs in his bathroom and we have a sesame seat cover on the toilet. So we are pretty much covered. He can choose either a little potty or a big potty regardless of where he is. 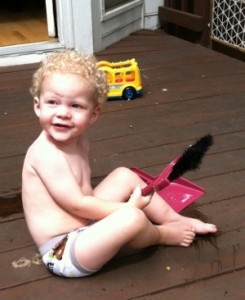 After we got back from Walmart I got Noah working on a little craft activity and I started setting everything up. Once it was all ready I stripped him down and took off his diaper explaining that he wasn’t going to wear diapers at home anymore and that he was going to wear big boy underwear. He was understandably excited about his Cars and Thomas the Train underwear and put them on willingly. I walked him around and showed him all the places that he was going to be able to go potty. As we were downstairs examining the new potty he sat down on the floor and started to make the face. You know, the “i’m concentrating so hard that it makes my eyes rim red and my nose turn pink” face. I quickly picked him up, stripped off his undies, and sat him on the potty right in front of us. Hurray! He pooped in the potty! I was thinking man, this is already starting off great! Then I had to dump the poop. Gag!! Way grosser than changing a diaper, don’t ask me why, it just is.

So I was very optimistic. I smartly had decided that we were going to spend the majority of our day in the kitchen, far away from the carpet, and out on the porch, immediately adjacent to the kitchen. It wasn’t too long when Noah stopped in the middle of the porch and stared down at his pants. I immediately knew what was going on and told him to come sit on his potty. He instead ran the other direction behind one of the chairs on the porch and peed. I did what the book said and immediately addressed the situation explaining that he had an accident and that he was supposed to sit on the potty when he needed to go pee. I cleaned him up with a baby wipe and took him to sit on his potty and see if he could pee some more. It was a no go. Luckily cleaning up the accident only involved pouring a cup of water to rinse off the porch.

Later, during one of our timed intervals I took him to sit on his potty. It’s quite hard to get him to sit still. So after maybe 30 seconds he was up and running off, completely naked this time, and he ran straight for his play tent! You can probably guess what happened at this point, he peed in the tent. Clean up and explanation ensued and then I got to clean up the accident. Picture this… me, a jar of clorox wipes, a tent, and about 50 freakin plastic balls. Fun. 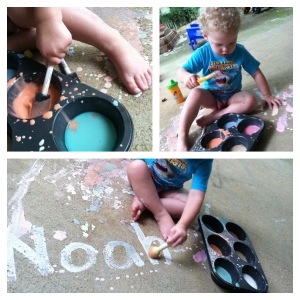 The rest of the day was somewhat less eventful, he peed in a cloth diaper during his nap, and then had two accidents while playing outside. Both times he made no indication that he was about to pee, but he was seriously engrosed in painting with liquid sidewalk chalk, so I’m not sure he even realized he was about to go. Then we had one more accident in the kitchen right when daddy got home. Noah was running to the door, then he froze and stared at me, I knew exactly what was going on and told him that he needed to go to his potty. He ran to me with his hands up at first, but then turned at the last second and was headed towards his play room. I was thinking, Oh my God! He’s going to go pee on his potty! But, alas, he got distracted my his booster seat. He is a sucker for those buckles, he loves to play with them. He stopped and started to buckle the straps and then the pee began to run down his legs. I would like to believe that had he not gotten distracted he would have successfully peed in his potty.

At this point I was pretty exhausted, it had been a long day. So I folded and put a pull up on him. He ended up peeing in it, but he got pretty upset about it and hid behind the glider in his room. I’m not sure if this is a good thing or a bad thing. I’m going to try to make sure tomorrow that he understands that accidents are ok, I just want him to do his best. We had a few power struggles today that weren’t directly related to pottytraining, so overall I think I put too much pressure on him today. I’m going to reread a few chapters in the book and try a few things differently tomorrow.