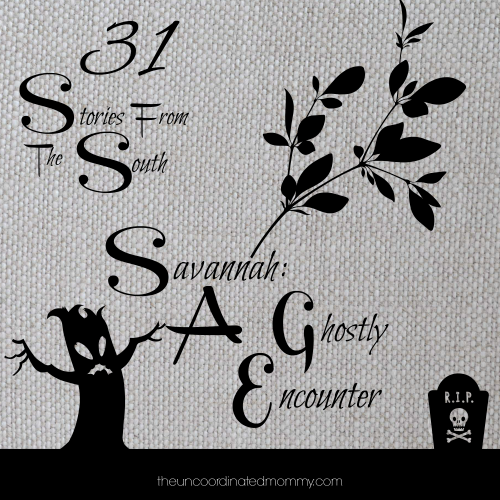 It was a beautiful spring day as they pulled into Savannah. The weather was perfect and they were able to take the top off of the jeep for drive. As they sat at a light she tilted her head back against the headrest and lifted her sun kissed face to stare at the spanish moss hanging above her. There were gobs of it hanging every where. The light breeze lifted the moss and it rippled through the trees like waves in the ocean. It was beautiful yet nauseating at the same time. She closed her eyes and took a deep breath. At eight weeks she naively thought she might have dodged the bullet of morning sickness, but it was hitting her full force now. This should make for a great anniversary weekend she thought. Nothing gets you in the mood quite like hot flashes and nausea, right?

They pulled in front of the old hotel and shielding her eyes from the sun she admired the wrought iron detail of the second floor veranda. The valet swung open her door and she climbed out of the jeep. The hotel was beautiful, it was the oldest in Savannah, but it had been completely restored and it was gorgeous. He had chosen perfectly. The mixture of luxury and history was right up her alley. As they checked in her husband, of just one year, had another surprise for her. Their room opened out onto the veranda. Under normal circumstances they would probably have spent the entire weekend sipping wine in one of the rockers, but it was just going to be ginger ale for her this weekend. Well maybe just a little sip of champagne to celebrate, assuming her stomach could handle it.

He carried the bags up to the second floor and quickly found their room. The hallways were long and narrow and the wooden floors, original of course, creaked underneath the red carpet runner. She felt a small shiver run through her. I’m not going to think about that, she quickly thought to herself. She was not going to let her imagination run away this weekend. Her abundant curiosity and love of history often got her in trouble and she desperately needed sleep. This baby, albeit only the size of a kidney bean, was sapping every ounce of energy she had. If she started to think about what may be lurking in these hallways she wouldn’t sleep a wink tonight.

The room was just as she expected. The bed was a beautiful mahogany king size bed and there was an old claw foot tub in the bathroom. She decided to take a quick bath to try to ease some of the aches from the drive and then quickly dressed for dinner. They wandered through the old squares making their way towards the river. It was strange how some squares could be perfectly still with no breeze at all and others the wind whipped through like a hurricane approaching. They picked the closest restaurant they could find with the shortest wait and she managed to force down some food. Heading back to the hotel, after she assured him a half dozen times that she didn’t mind, he picked up a six pack and they crawled through the oversize french paned windows out onto the veranda. They found two rocking chairs near the railing and sat and chatted.

As they talked they kept noticing every now and then large crowds of tourists walking along the street below. They would all stop and the guide would talk and gesture behind to the hotel. Then it dawned on her, they weren’t just historical walking tours, they were ghost tours. Their hotel was on the ghost tour! That was it, she had tried her hardest, but nothing could stop her now. She whipped out her smart phone and typed in the name of the hotel. The main website popped up and it had a history section. After a short scan she realized she wasn’t going to find what she was looking for there. She searched again but this time added “haunted” after the name.

Jackpot! As it turned out the hotel was built in the mid 1800’s and was turned into a hospital for first confederate troops and then again for General Sherman’s troops during the civil war. It was also used as a hospital twice when yellow fever epidemics swept through Savannah. She remained glued to her phone as she scanned through story after story of encounters people had posted on the web. On several occasion guests had reported seeing soldiers walking the halls in uniform and upon asking the front desk how they could get tickets to the play were stunned to find that there were no reenactments or plays taking place in the hotel. Others had reported the sounds of children playing in the hallways when no one, child or otherwise, was present. During one of the earlier renovations floor boards were removed and human remains were discovered. It is assumed that these were operating rooms where soldiers received amputations during the civil war. Many guests also reported waking up to the feeling of someone holding their wrist, like a nurse checking a pulse.

As she read this the blood drained from her face. Hearing strange sounds was one thing but waking up to someone or something touching you!? He just chuckled as she recounted story after story and finally insisted she put her phone away, otherwise neither of them were going to get any sleep. Around 11 they crawled back through the window and got ready for bed. Too wired to sleep she flipped on the TV and insisted that the lamp in the room remain lit. Finally around 12:30 she gave up and turned off the TV. As she lay in bed her ears strained to distinguish every creak and bump that echoed through the old hotel. The sounds of cars and people outside slowly began to die down until there was nothing but silence. Every now and then she could hear the air conditioning as it hummed to life. She couldn’t decide which was scarier, laying there with her eyes closed waiting for something to touch her, or being scared to death she was going to open her eyes and see someone or something in the room. She finally decided that she would pull the covers up to her chin and tuck them around her and then close her eyes. Maybe nothing would be able to lift her hand up off the bed if it was wedged under covers.

Her heart was already pounding and combined with another hot flash she was practically sweltering under the covers. This was beginning to get ridiculous. Her imagination was in full gear now. When she couldn’t stand it anymore she flung the blankets off leaving only the sheet to cover her. She had already stripped off her t-shirt earlier and was left with a sleep bra and shorts. She rolled onto her side and tucked her arms in the sheet and curled them against her chest in a borderline fetal position. Probably due to sheer exhaustion she began to drift off. It was then she felt the weight of a hand in the middle of her bare back. Her heart stopped and her blood ran cold. Her body jerked so violently it actually hurt. The hand began to move across her back and she felt the mattress creak as he leaned over and kissed her neck. “Lord have mercy!” she exclaimed, “You scared me half to death!” He grumbled something along the lines of “you’re crazy” and rolled over falling back to sleep. Almost an hour later she finally drifted off only to wake many more times throughout the night hearing sounds in the hotel and probably in her head.

The next morning she stared grumpily at him across the table as he sipped his coffee. Lucky bastard. All she could handle was orange juice and toast and she would no doubt be reaching for the tums in a few minutes too. He just laughed as she complained about her midnight heart attack. They walked around town window shopping and then stopped back at the hotel to retrieve the jeep and head out to Tybee Island to enjoy an afternoon at the beach. Once back in town, after many promises not to freak out again, he conceded and they scheduled a ghost tour by horse and buggy. After an amazing dinner, which she barely touched, they met their tour guide and the one other couple who would be joining them.

The ghost stories were spooky, but the  historical accounts were even more unnerving. Apparently during the yellow fever epidemics they began to run out of places to bury their dead. It is said that bodies were secretly buried in underground tunnels throughout the city to keep from causing a panic among the survivors. When they began to near the hotel he leaned forward and asked the other couple if they wouldn’t mind if the tour guide skipped the stories about the hotel. She rolled her eyes at him and tried to ignore the smell of horse manure as the carriage lurched and she tightened her grip on his arm. Secretly she was thankful. She didn’t need to hear any more stories. She had survived one night and hopefully she would be too concerned about what was happening in the other inns and hotels to worry about some overzealous ghost nurse. The other couple laughed and readily agreed to bypass the hotel and it’s hauntings. After the tour they returned to the veranda and their rocking chairs. It had been a wonderful weekend and as he had commandeered her cell phone she expected to get a much better nights sleep. After a warm bath she crawled into bed and snuggling face to face they drifted off to sleep. It was sometime in the middle of the night that she woke and opening her eyes realized he was awake too. His eyes were wide and she sleepily asked what was wrong. He pulled her to him and shushed her back to sleep.

It was only as they were pulling away from the hotel the next morning that he told her about his late night encounter. As he lay there sleeping on his side he woke feeling the mattress move as if someone had sat down. He felt a warm sensation in his ear and then a loud pulsing sound, like someone or something was messing with his ear. When he went to roll over and sit up he couldn’t move. It was as if someone was holding him on his side. As quickly as it had started the sound stopped and he rolled flat on his back. He glanced at the clock on the nightstand and it was exactly 3AM. “I knew it!” she exclaimed. It was settled, the next time they visited Savannah they would be staying at the Hilton.

If you are unfamiliar with this story, this is a true account of our first anniversary trip to Savannah and I was eight weeks pregnant with Noah. 🙂