Note: This post was written last Tuesday during the snowstorm. For whatever reason I am just getting around to posting it.:)

Eric and I moved to Atlanta 2 years ago….. from Florida. So you can imagine our elation when we saw that it was supposed to snow today! Woo hoo! Last night it said accumulation up to an inch possible. Then this morning it said up to 2 inches possible. It is now 11:30pm and there is a little over 3 inches of snow in my yard and my husband still hasn’t made it home.

The boys and I had an appointment in the city this morning and on our way back up to Marietta, where we live, I noticed that it was starting to snow. Awesome! It was only 10:30 and it wasn’t supposed to start until noon! We stopped at the grocery store, which is normal for a Tuesday, and then headed home. At this point the snow was starting to accumulate on the roads. We carefully made our way home and the boys immediately ran out into the driveway to play with the little bit of snow that was covering the ground. 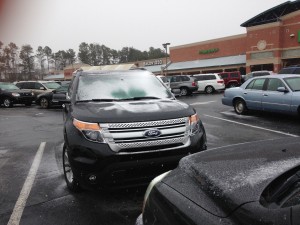 After eating lunch I took them out back and let them play some more. Bryce wasn’t sure if he was loving the snow and I was worried about him slipping. 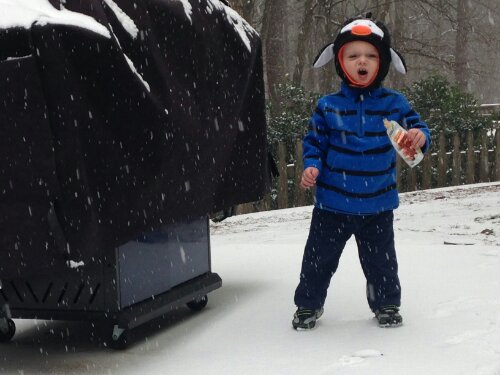 While watching him I noticed Noah on the slide getting ready to try to go down. 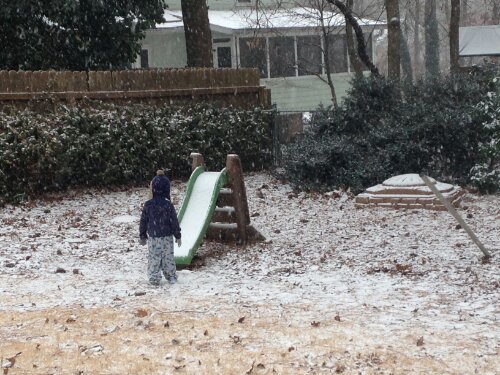 You can probably imagine how this turned out. The words be careful weren’t even out of my mouth before he slipped and fell. Luckily, or not depends on who you ask, he didn’t fall straight to the ground but landed more on the top part of the slide and then rolled off the back. I left Bryce and ran across the yard. Noah bounced up crying “It’s cold! It’s cold! Awwww, I’m all wet!” I’m just happy he didn’t fall straight to the ground and put his arms out to break his fall, that’s how little arms get broken. Driving to the emergency room in the snow was not high on my list of things I wanted to do.

I figured that was enough fun for the time being and took them back inside. The boys played while I watched the news and the snow began to pile up. I called Eric at work around 1:30 and asked if he was coming home. He had just sent his staff home, but hadn’t left yet. I put Bryce down for his nap and sat on the couch to do some work.

I had left the Weather Nation channel on, thank you DirecTV for dropping the weather channel – weather nation sucks, and Noah decided it wax a game! 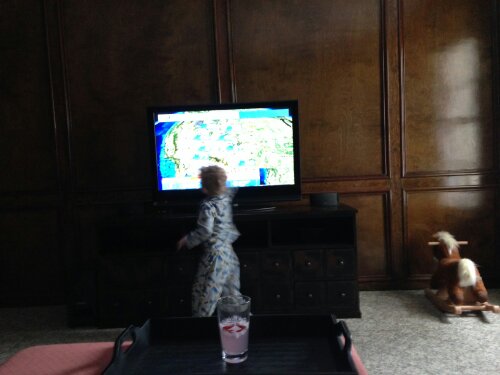 He ran up to the TV and started swiping his fingers across it. About 60% of the time the map on the screen would move and he would say “look in did it! This game is fun!” It seriously kept him busy for at least 5 or 10 minutes!

Eric finally called me around 2:30 and said he had left the Georgia Dome but was stopping to get gas and then getting on the road. He also mentioned that his phone only had 15% battery left and it would probably die. I immediately insisted that he turn it off and only turn it on in case of emergency, he argued it would probably die anyway and I again insisted that if he turned it off it shouldn’t. We had a short but determined argument over this and of course it did eventually die.

After Bryce woke up from his nap I dressed the boys as warmly as possible and took them outside to play in the snow. Bryce kept taking his gloves off and I was FREEZING, having dressed them warmer than myself. 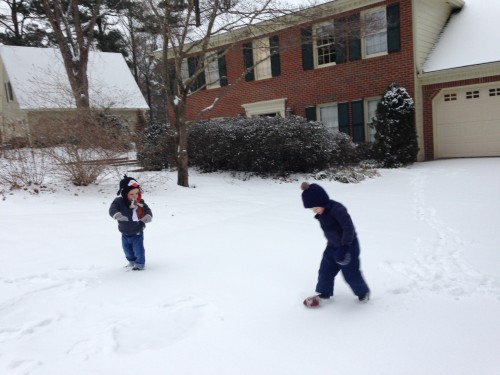 We watched the neighborhood big kids sled down the hills and then went back inside to warm up!

I turned the fireplace on to warm us up quickly since Bryce’s hands were blue and watched him like a hawk! Noah luckily received a hand me down ski-bib from a cousin so he had stayed pretty warm and dry. 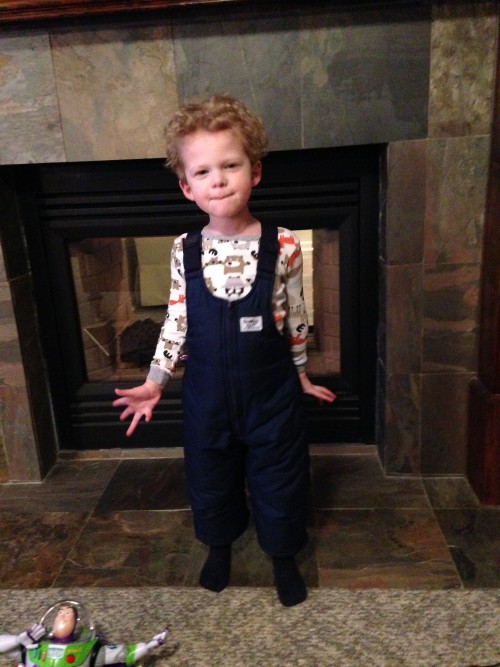 Around 6:30 we ate and played. I continued to watch Bryce around the fireplace, but had assumed that Noah wouldn’t touch it. He knows it’s hot, and he hates hot things. He will even point to it and say “That’s hot, it hurts.” Apparently curiosity got the best of him and I saw him reach out and touch it, once again before I could even get the words out of my mouth. He screamed and ran off towards the kitchen. It took me a while to figure out whether he had burnt it badly. There is a small blister, so it was pretty bad. There are so many myths about what to do with burns so I immediately checked MayoClinic.org on how to treat a burn. They are my go to site for medical research, love them.

It said to put the burn under running cool, not cold, water for 10-15 minutes and not to put ice on it. Imagine trying to hold a toddlers hand under cool water for even 2 minutes. I would rather give a cat a bath!

He kept crying that the water was making it hurt, I kept insisting the water would help and that his hand was just hurting. That the water wasn’t hurting it more. I finally grabbed our little old fashioned ice pack that is pretty insulated and let him hold it on his hand for very short periods of time and gave him some advil for the pain. He would still remember that it hurt about every 5-10 minutes and start jumping about whining and complaining that his hand hurt. MayoClinic.org also mentioned that wrapping the burn in gauze can help with the pain by keeping the air off of it. I didn’t have gauze and I didn’t think Eric, whom I had yet to hear from, would appreciate me asking him to pick it up at the store on his way home. So I grabbed some toilet paper and made a makeshift wrap. 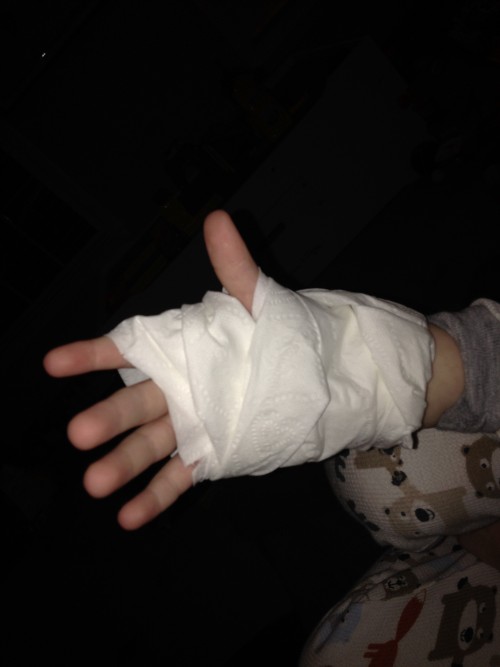 Meanwhile Bryce was of course irritating his wounded brother. So I turned on Monsters Inc. for Noah and took Bryce up for a bath and bedtime. Once he was asleep I headed back down to the burn victim who started his whining back with renewed vigor now that he had my undivided attention. It was apparent that extreme measures would be needed so I pulled out the best medicine of all, hot chocolate!

After drinking his hot chocolate he settled down on the couch and soon fell asleep in my lap. We sat like that for at least an hour or more until a combination of things required me to risk moving him. #1 my legs had fallen asleep #2 I was freezing! Noah had turned off the fireplace earlier telling me that it was “bad” and the thermostat was programmed to turn down at 10:30. And most importantly #3, Noah had a stinky diaper and I was finding it hard to breathe. Trust me. It would take something serious for me to wake this wounded, sleeping child. 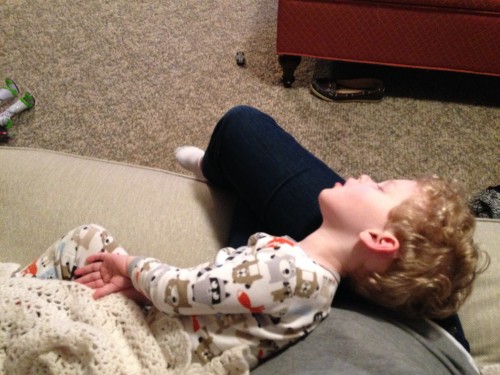 Around 9:15 Eric called. Finally. It was a very short phone call. He said his phone had died pretty quickly and he had just picked it up to see if it would turn on and it miraculously did. He had just enough time to tell me that he was still stuck in traffic and had only made it to the I-285 / I-75 interchange. In 7 hours he had only made it approximately 11 miles and he still had another 10 miles to go! The phone quickly died, but at least I knew he was ok!

After getting off the phone I picked Noah up and changed his pull up and took him up to bed. It is now 11:35 and I have since been sitting on the couch watching the news and Facebook. I think it’s pretty awesome what most of the citizens of Atlanta have been doing. People have been passing out food to others stuck in traffic and offering rooms to friends who are stranded on roads nearby. The Facebook page SnowedOutAtlanta at this point in time has 19, 600 members and it only opened earlier this afternoon to help stranded motorists.

Here’s to hoping Eric makes it home safely soon. I know he is exhausted and starving. I hope someone gave him a banana. I also hope he is warm and safe in his car. I keep hearing stories about people having to walk 4 miles after having to abandon their cars!

Update:
At this point I closed my computer for the night. About an hour later, around 12:30, Eric finally walked through the door. I was a nervous wreck by then. After 10 hours in the car with no water and only 2 rice krispie bars he finally arrived home. Oh and did I mention his jeep is a manual transmission? His legs were shaking when he stumbled through the door. Unfortunately no one gave him a banana. 🙁

We are working on sharing his side of the experience with you. He’s got quite the story to tell! Hopefully we will post it this week!

The term “hellhole”  was coined by my stepfather who lived in Atlanta back in the 60’s. Apparently the traffic was just as bad back then too!! Every time they come to visit and get stuck in traffic I have to listen to him chant hell hole over and over. LOL