How We Fixed Our Broken Bedtime Routine

Learn how we fixed our broken bedtime routine. As parents we try our best, but really we are just flying bling here!! Learn from our mistakes so you don’t have to go through what we did! 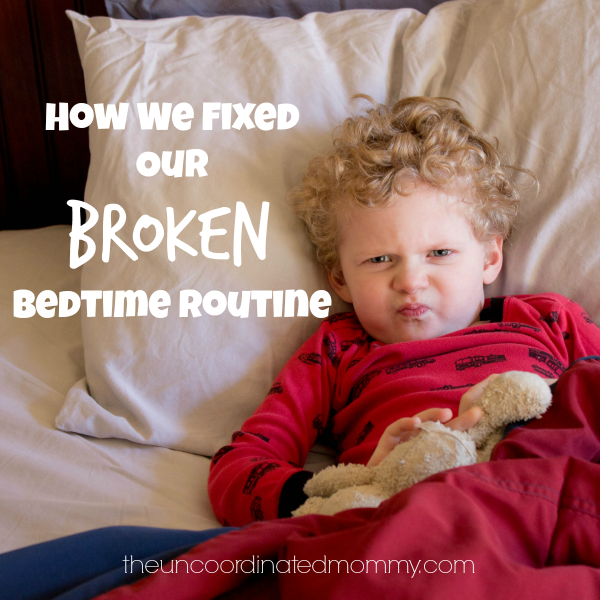 How NOT To Get Your Child To Sleep

Our bedtime routine consisted of chasing Noah down as he played a game of cat and mouse. And it was a game to him, that was until we caught him and then he would go limp and cry and moan that he wasn’t ready for a bath or to go to bed. We would literally drag/carry him upstairs and put him in the tub with Bryce. At that point he would start having fun and play until it was time to get out of the tub. More wailing and gnashing of teeth.

I would finally get him in his PJs and in bed where we would read books and talk. We would sing a few songs and then protests would begin that he didn’t want us to leave the room. It didn’t matter if it was me or Eric, he would fight us just the same. The only time he wouldn’t fight was with babysitters. He was a perfect angel at bedtime with them. o_O

Mostly he was afraid of his room. We have textured ceilings in our house and Noah insisted that they were spiders. We, of course, insisted that they were flowers and not at all scary. That didn’t fly. We tried everything we could to make him like his room. I got vinyl stickers for his wall. I put cutouts of cars on his ceiling, you know, to squish the spiders of course! Nothing worked because we soon realized that he might be a little afraid of his room, most kids are at some point, but mostly he was using it as an excuse.

Bedtimes became full of excuses and he would constantly leave his room. Then one of us would have to go upstairs and put him back to bed and the tears and screaming would continue. Then we tried sitting out in the hall way and every time he would crack the door we would say “Get back in bed.”

This didn’t work because he would slam the door and yell and cry and Bryce would wake up and cry. We had tried putting a baby gate in his doorway but he would just push it down and the crashing sound would wake up Bryce.

I was beat down and exhausted and I made the biggest mistake ever. In order to keep him quiet and in his room so that he wouldn’t wake up Bryce I started laying down with him until he fell asleep.

This kept him from waking up Bryce but what would inevitably happen was I would be stuck in there for at least 30 minutes and half the time I would fall asleep too. I would wake up at 9:30-9:45 and that would pretty much be my evening. I wasn’t getting to spend anytime with Eric!

So we decided that the only thing we could do was turn his door knob around. We were both a little uncomfortable with this at first so we gave him a chance. We told him if he stayed in his room we wouldn’t lock the door. Dumb. It was basically a challenge. Every single time he would leave his room then we had to take him back in and lock the door.

This is where it got really bad.

Noah would get so angry! Eventually as I would walk him back to his room he would look up at me, red faced with tears streaming down his face, and stubbornly say “If you lock my door I will crash my room.” And he wasn’t kidding. He would tear all the sheets off his bed, throw all the books on his bookshelf across the room, and hurl toys and books at his door. This inevitably woke up Bryce and we would get angry and go fuss at him, sometimes spank him (mostly out of desperation, we didn’t know what else to do), and start taking things away. This only made him angrier.

It was insane. And it was happening every single night.

The Right Way To Get Your Child To Sleep

I decided to participate in a parenting course offered by my church. I had seen the course offered earlier in the year but I wasn’t ready to spend money on a parenting class. By fall Noah’s bedtime fiasco had escalated and I was being driven to the brink of INSANITY and I didn’t bat an eye when I wrote the check. I needed help and I needed it bad.

The parenting course is called Love and Logic and it is amazing!!

One of the premises for this parenting style is removing anything that puts kids on the defensive. Once that stubbornness is triggered any chance in teaching goes out the window. Everything is delivered in a loving manner. Empathy, empathy, empathy.

When I first heard this I really had a problem with it. It was like the kids were winning! That couldn’t be good! Honestly, even though I have always viewed myself as a positive person, this whole ZERO negativity thing seemed so weird. And how on earth was I going to be able to control my temper! I didn’t want to feel sorry for him. I was the one who was exhausted and pulling my hair out, yet I was supposed to coddle him.

Turns out, it’s brilliant. AND exactly what we needed. Turns out your don’t have to yell and be stern with your children to teach them. Just because you are responding with empathy does not mean you aren’t setting firm limits and rules.

Noah was SO very angry and this new approach just took all the fight out of him. At first I started out with baby steps. When he would leave the room the first time I would pick him and respond lovingly and oozing empathy, ” I know you’re angry, but if you don’t go to bed now you will be soooo tired tomorrow” and make soothing noises until I got him to his room. Sometimes this meant carrying a flailing Noah down the hall way as he kicked and scream. Getting him through his doorway was like trying to give a cat a bath. Once in, after prying his little hands from the door frame, I would lock the door and leave. At this point the crashing would commence.

Now instead of getting angry I would calmly wait outside until I heard a good number of things go flying. Then I would walk in the room and start picking up whatever it was that he had thrown. All I would say was, “Oh no, I better take these so your don’t hurt yourself or break them. That would be sad. Hopefully you can make some good decisions tomorrow to earn these back.” Then I would leave. I didn’t listen to a single word he said. No response at all.

He then would tear all the sheets and covers off his bed. I would wait awhile and then walk in and calmly make it back up saying, “Oh no, you might want your covers back on the bed in case you get cold later.” Once again no responding to him and quietly leaving the room saying “I love you, sweet dreams.”

This took A LOT of his fire out, but bedtime was still a disaster. His main control over us was that we didn’t want him to wake up Bryce. I finally decided that we couldn’t let him use that to manipulate the situation. I had realized that every time we walked back into the room he was getting exactly what he wanted and he would keep it up until he finally fell asleep from exhaustion.

At this point I realized that we would have to stop going in, no matter what. And if Bryce woke up we would deal with that. Eric didn’t do so well with this. It was like we had traveled back in time to when we sleep trained Noah. I would sit in the living room listening to his wails, knowing exactly what each cry meant, while Eric sat nearby asking “Are you sure he’s ok? What if he’s hurt himself. I think we should go check on him.” But I knew what he was crying about, he was mad, angry and scared, I could hear it in his voice. And Noah had a right be angry, it was our fault. Kids need firm rules and boundaries and we had let those boundaries go. We had conditioned him that if he yelled loud enough and for long enough then we would eventually come.

Except now we weren’t doing that anymore.

The first night he cried for over an hour before finally falling asleep. It was excruciating. I knew that we were never going to last if we couldn’t reassure ourselves that he was safe so I bought a used video monitor from a blogger friend, Krystyn, who just so happened to recently receive a new monitor, you can check out her video monitor review here.

Once we had the monitor set up we could see that the crashing noises we heard upstairs were just books and toys, and eventually after emptying his room it was just Noah jumping up and down on the hardwood floors. He was perfectly OK minus the hysteria.

Three Changes Made a HUGE Difference

If you have a solid bedtime routine that works for you then awesome just DON’T change it!! Bedtime used to be so easy for us and then we let the little monster start manipulating us. It’s ok, it happens, everything with Noah is knew to us. Bryce doesn’t stand a chance! LOL

If you are having bedtime problems like we did then hang in there!! I know you can do it and this to will pass. I hope that some of these tips help you. If you want help brainstorming some solutions or just want to commiserate please leave a comment below (or respond to comments below) so we can help and support each other!!