I Was Kid Free This Weekend!!!

That’s right I said kid free! This past weekend Eric and I got on a plane and left town without the kiddos!! This is the first time I had been on a plane in over three years! I was pregnant with Noah last time. And it was only the third time I had traveled anywhere without the kids. Actually I would say technically it was only the 2nd time, because one of those times I was pregnant with Bryce and he was obviously with us.

Anyway, we got on a plane and few all the way from Atlanta…..drum roll please…..to Charlotte. That’s right a whole 37 minute long flight. LOL While the distance left a lot to be desired, the flight itself did not.

Eric works for the Atlanta Falcons and they are hands down one of the most amazing organizations to work for. This is his second NFL team he’s worked for and third professional sports team, he was working for the Tampa Bay Lightning (NHL) when we met in Tampa. The Falcons are the only team he has ever worked for that not only allowed employees to travel with the team, as a fan, for an away game, BUT also allows them to bring a spouse or guest!

It was an amazing opportunity. We were very lucky that my in laws were able to come stay with the boys short notice. So on Saturday we headed to the airport and met a bus which took us to the team plane. Like literally took us right out on the tarmac to the plane. 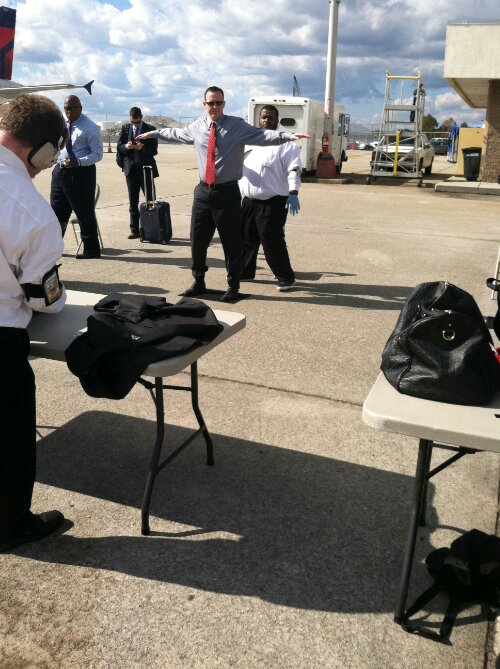 Here’s Eric going through security, I was standing about 20 yards from the plane when I took this. The plane was a Delta chartered jumbo jet. The players sat in the back and the coaches, manager and team president were in first class. That left all the remaining staff and us in the middle. Oh and did I mention I was the only girl, other than the flight attendants, on the trip! I guess I shouldn’t have been surprised but I still kind of was.

Eric had already warned me about the amount of food that was going to be served. I figured hey it was only a 37 minute flight, how much food could they give us in that small amount of time. Turns out? A lot!! 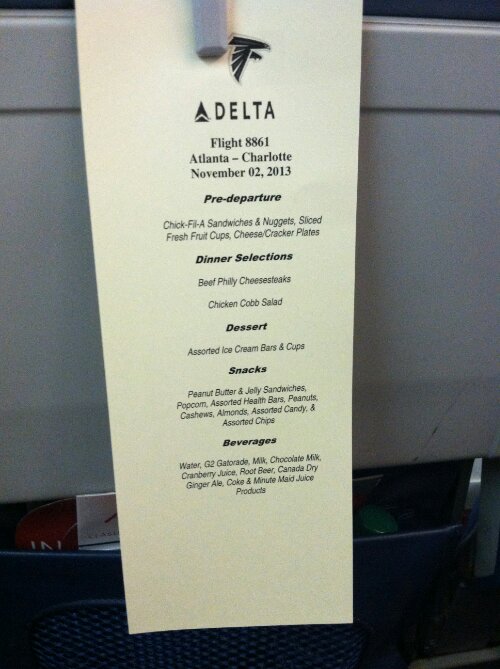 And yes I pretty much ate all of it, except the ice cream. I had to draw the line somewhere!

When we landed in Charlotte there were four buses waiting for us on the tarmac again. We were already instructed to ride on the fourth bus, which was designated for staff and guests. Right as I was getting on the bus I realized Rich McKay, the team president was sitting right in the front seat. I almost didn’t recognize him because I was too busy tripping on my heels, which weren’t high by the way. I only wear heels once a week at church and that doesn’t involve steps so I was a little out of my element! Any who, I managed to make it on the bus without completely embarrassing myself, although Mr. McKay did laugh. Nice.

The funniest part was that all the rookie players had to ride on the bus with us! Lol They looked pretty bummed about it, like the cool kids told them they couldn’t sit with them, ha ha.

Another awesome thing about the trip is that once we landed in Charlotte we had police escort wherever we went. While this was very cool, it was very unnerving. There’s something about running red lights that really makes me nervous! One car even stopped in the middle of the road because he thought he was getting pulled over!

We made it safely to our hotel and Eric and I rested and then cabbed it to downtown Charlotte to have dinner and watch the FSU game. We stayed out until 12:30!!! Shocking, I know!

After an amazing night sleep in which no one woke me up crying, we ordered room service and got ready for the game. One thing I forgot to mention, when traveling with the team you have to dress nicely. That meant Eric had to wear a suit and I had to wear a dress or dressy slacks etc. That was fine on Saturday, when I wore my black and white chevron shirt with black pants and my new red necklace, but unless I wanted to change in a stadium bathroom I was going to have to wear dressy clothes to the game too! 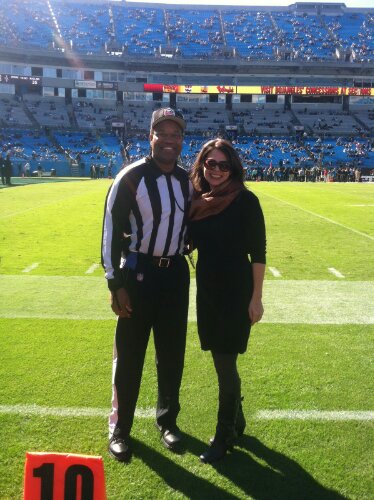 This was my outfit of choice. A black cowl neck dress that I bought after Christmas last year from Old Navy for $14, $8 Vera Wang tights from Kohls, and my $40 boots from Kohls too! The scarf was a gift my mother brought me back from Bosnia when my sister and her husband were living there. Oh and the arm candy? That would be the side judge, Ron Torbert. 😉 He graciously agreed to take a picture with me. 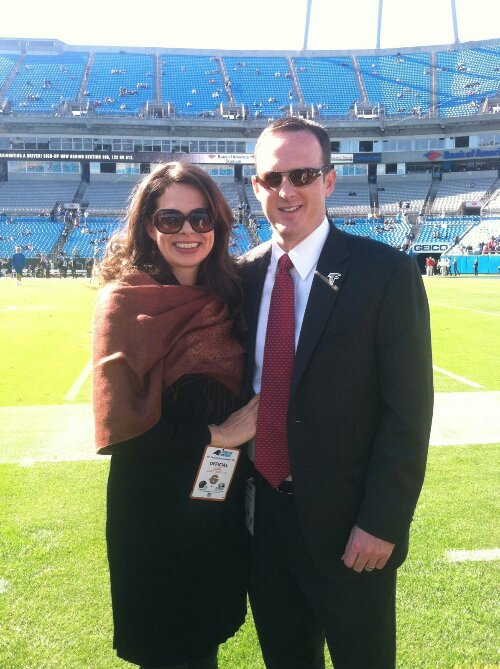 Unfortunately we lost the game. 🙁 But as you can see we were two VERY happy and VERY rested individuals. Its amazing how fancy I can get when I don’t have kids pulling at me and climbing on me while I get dressed! We made it back to the plane and home in record time. Leaving the stadium was also interesting because the fans knew it was the visiting team on the bus. Needless to say I saw quite a few birds, and not of the Falcon variety. Traffic was a nightmare , but they rerouted cars out of our way and before long we were through the mess and on the way to airport.

When we got home there were two VERY excited little boys waiting at the door to greet us. Sometimes, I think the best thing about leaving home is coming back. 🙂