Leather and Lace and Deer with Santa Hats 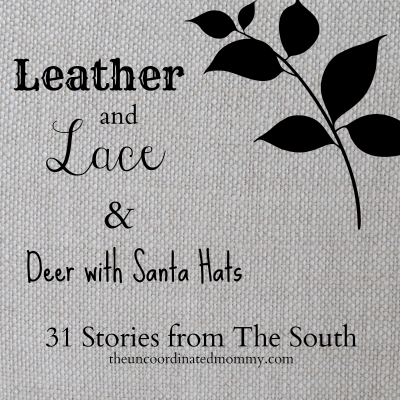 Southern women, myself included, pride themselves in their delicate ways and soft touch, but have a solid core tougher and stronger than the roots of an oak tree. We are taught from a very young age that we are as strong, and in many cases (hello! child birth) stronger than guys, but it is best if they only get little glimpses of it here and there. My mother, the turkey hunter Phd’s, favorite phrase was “tough shit, life’s not fair, get over it.” It was meant with love and even though sometimes it wasn’t received so well, both my sister and I agree that we are much better/stronger for having heard it. We were held and comforted when that was what we needed, but when a life lesson stood to be learned, this is what was most often sent our way.

I try to apply the idea of Leather and Lace in my own way of living. Recently, as this space has become more popular I have received some criticism that, while somewhat constructive, was less than tactful. In receiving this I have had to tell myself that I need to toughen up! And I know I can, I just have to channel my “inner Johnelle” as we like to say in my family. If you’ve been following this blog you may have started to notice my family is chock full of women. My mother is one of 3 girls and each girl had 2 girls. Growing up there were all these women and one poor errant male cousin, bless his heart, and my grandfather who was unabashedly adored by all of his girls and he deserved it more than anyone I’ve ever met. Johnelle was my grandmother, the matriarch of this clan of southern women. Her nickname to those of us brave enough to say it was “Sergeant Roe,” Roe being my mothers surname. And even if you were brave enough to utter it, you definitely never said it in her presence! When my mother was a young girl her boyfriends were way more afraid of her mother than her father, and rightly so! Under close examination it is apparent that there is a little bit of Johnelle in all of us Roe women- that would be the leather. To borrow another coloquial saying, she was tough as nails.

One of my favorite memories of my grandmother occurred on a Christmas eve back in the late eighties. I think I was about 9 and we were celebrating at my Uncle Ferrel (my grandmas brother) and Aunt Sandra’s house. As it was Christmas all of the deer on the walls had Santa hats and I think the hissing stuffed bobcat over the fireplace might have been wearing one too. Some families like to sit around in a nice circle and ooh and ahh as each one opens a gift. Not so in this family. The youngest of the group would start passing out presents and as soon as you started to get a good stack you just ripped into them. It was absolute pandemonium. Red and gold paper was flying, and squeels of “Mama, Daddy look what I got” could be heard across the room.

It helps to know a little history before I get to the rest of the story. My grandma would always come into Tallahassee to go to Gayfers, an old department store, to get her hair done. Most often they would stop by the house, since we lived right down the road from the mall, and she would drop Grandaddy off to visit and I would go with her to the store. We always took the elevator to the second floor and would follow the shiny walkway through the home/seasonal section on the way to the salon. It was Christmas season so they had ornaments and trees every where along with special gifts. Amongst them was the most beautiful wedding doll I think I had ever seen. Her dress was made of ivory sateen and her blond hair was pulled up, but with curls hanging down all around. Her dress had a train and her veil was even longer. She just glowed under the sparkly lights. And every time we would pass I would stop and just stare in awe and marvel and her beauty. Then one day she was gone.

Fast forward to Christmas eve and I am tearing into the flimsy festive paper and as I rip a piece back I can see her laying there staring up at me. It was my doll!! My mouth drops open and I just start repeating, my voice barely a whisper, “Mama, it’s my doll.” As I say it over and over I begin to get louder and louder and the shock on my face is replaced by a huge grin. “Y’all look! It’s my wedding doll! It’s her! I finally got my doll!” I had thought she was gone, but it turned out that my grandmother had gone back to the store after one of our visits and purchased her for me.

It also should be noted that the entire incidence of Christmas eve was captured on video. It’s sad to realize how many people on that video are no longer with us today. But it is especially wonderful to watch this scene play out between me and my grandma. As the video zooms in on me opening my present it pans back and forth between myself and my grandma. And I’m pretty sure the look of joy on her face watching me open it was just as great as mine when I opened it. In that moment you could see that there was a bit of lace in Johnelle, her eyes brightened and you could see her soften as she witnessed my glee. And then quicker than you can John Brown, that smile dropped and she started wagging her finger at me with a scowl. “Now you listen here, the next time I come over to your house and you have taken her clothes off or brushed her hair, or I find her laying on your floor, then she is MINE!” It’s at this point of the video that you can hear snickers emitting from folks around the room, and now days when we watch it everyone just erupts with laughter, because THIS was the Sergeant Roe we all knew and loved. I hastily muttered a “Yes Ma’am” and continued to gaze at my doll and stroke her pretty shiny dress.

To this day that doll is in PERFECT condition and is displayed at home in my old bedroom. Next to her is my mama’s wedding doll and my grandmother’s wedding doll. ALL in amazing condition.