Must Have Mondays – Life With Pacifiers

Whether or not to use a pacifier is a personal choice. For us it was a no brainer. I immediately nursed Noah as soon as he was born and after trying a couple of different holds he latched on like a champ. Once that concern was out of the way I was comfortable offering him a pacifier. It became immediately apparent that sucking was a big soother for him, and not wanting to be the sole soother I made sure that he enjoyed the binky as much as me. I already knew I was going to be his only source of nutrition for quite some time, I didn’t want to add on to that! Mommy needs breaks and daddy needs time to bond too. 🙂

Keepin’ A Hold On

For the first couple of weeks he loved the hospital pacifier. We were constantly holding him so it was easy to help him hold it in. The more he began sleeping completely on his own and hanging out in his bouncy seat the more I realized that he couldn’t keep a good hold on it. Now that was not going to work. So off to Babies R’ Us we went. I picked out a couple of pacifiers that I thought might be easier for him to hold onto and after a few trial and errors we had a winner!!!! The Nuk Genius!! And man was it genius! He could hold on to it no problem.

When baby #2, aka Bryce, came along we couldn’t find these anymore! He loved the MAM pacifiers from the beginning.

Then as the weeks passed and he started sleeping longer at night I realized a new problem. The pacifier had become a curse. Every time he would go to sleep it would inevitably fall out at some point in the middle of the night and when he would eventually wake up he would cry until we came in and gave him his pacifier. Man that was definitely a rough time. I had gotten used to getting more sleep and of course as life as a parent goes, we hit a new phase and everything changed. At this stage I offer no advice. We literally just took turns going in and giving him his pacifier. I would, however, suggest glow in the dark pacifiers. It is damn near impossible to find those suckers in the dark in the middle of the night. Also have lots of extras, I swear either Noah or the crib itself was digesting them. They would just disappear, forever!! Too bad the Nuk Genius doesn’t come in glow in the dark!

The thought did occur to us at this point that maybe we shouldn’t have pushed the pacifier. Had it really been worth all of this hassle? After careful consideration we decided, and still believe, that it totally was. When he was in the car and whiny, the binky was our savior. When we were sitting in a restaurant and our little teradactil decided to exorcise his lungs? Binky. When he got his shots? You guessed it binky.

Upside Down, Right Side Up

When we reached the stage where he could pull out the pacifier and almost put it back in we realized a new issue. The Nuk pacifier had a handle on it and it had to be put in right side up. He definitely didn’t have the coordination to manage it. So we switched brands again. We had these MAM pacifiers that someone had given us and they worked perfectly!! These pacifiers had no handle and there was no issue with him putting it in upside down. Both ways worked! The MAM pacifiers also come in glow in the dark and they have some with rubber edges that were great when he was teething.

The final issue we ran into with pacifiers was when Noah was old enough to move around his crib he would have trouble finding his pacifiers and most often they would fall into the cracks in the crib. That was when a friend told me about the wubba nub. What a wonderful invention! Except, we had one problem. Noah really did not care for soothie pacifiers and all wubba nubs have soothies. If your little one likes these pacifiers then you are set! If not? Well then you just have to get a little creative! Enter our homemade solution!

I took this little bear that I had received at a baby shower and sewed Noah’s favorite binky to it! And Voila! Meet Binky Bear. Now Noah was able to find Binky Bear pretty much anywhere in his crib during nap time or in the middle of the night and we were FINALLY able to get some sleep. 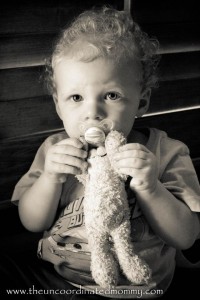 Since making Binky Bear I have found that there are other versions that are being produced. Apparently there is a binky bear already in production, but I like mine better. 🙂 Really unless your baby loves soothies, just grab a small stuffed animal and sew his/her favorite binky to it. Much easier than shelling out the $25 for an “Official Binky Bear.” Yikes! And even after we took the binky off of binky bear we still call him Binky Bear and Noah still to this day loves him so much!

So, tell me, does your precious darling have a binky, paci, or wubby that they just can’t do without? Which kind is their favorite? Any tips or tricks for surviving life with a pacifier?