And now the real fun begins!!! Yeah!! We get to start decorating the nursery!! The most awesome part is that my wonderful Aunt Linda is helping me. She is probably the most fabulous interior designer that ever did exist. I may be biased, but it’s still the truth.

So, I came up with a theme and it even has a name. Drum roll please……. Noah’s Nighttime Nursery. 🙂 The idea is to take nursery rhymes that have nightime themes and incorporate them into the design of the nursery.

My aunt is going to paint a mural on rolls of canvas for us to put on the wall behind the crib. I am in love with the mural idea. I decided to take my photoshop skills and put them to good use. As you can see below I have taken different illustrations that I found online and cut and pasted them together to create my idea for the mural. Obviously it won’t look exactly like this, but this way Linda has an idea of what I’m picturing in my head. Sometimes it so hard to describe something correctly and this will definitely make it easier.

The cow jumping over the moon is obviously from the “Hey Diddle Diddle” nursery rhyme and the little kids in the ship are from the poem “Wynken, Blynken, and Nod.” If you haven’t read this poem it is probably the sweetest thing in the world. It is long, so rather than post the whole thing here, check out this link.

Now apparently the cat needs some explanation. The actual illustration of this cat is from Pinocchio. That is Figaro, Gepetto’s cat. You may be asking yourself why is Figaro on a cloud in this mural. Well as you can see, there is a fiddle lying on the cloud next to him, Figaro is representing “the cat and the fiddle” from Hey Diddle Diddle. I chose Figaro because when I was probably 6 or 7 I was in the Little Miss Watermelon pageant and I had to choose a disney character to be for my talent. Obviously since I was a little girl and obsessed with cats, I wanted to be Figaro. So in honor of my award winning peformance as Figaro, I got 1st runner up, I thought it would be cute to have Figaro in the mural. This apparently confused some people, so I thought I would explain. It actually prompted a comical discussion between me and Eric. His point was that Figaro doesn’t look right in the mural, and I quote, “because cat’s don’t belong on clouds.” Of course my response was, “and cow’s regularly jump over the moon and little boys fly around in wooden shoes”???

Also my mom and step-father are currently out west on vacation and they found this!!!! It is going to look so adorable in the nursery!! 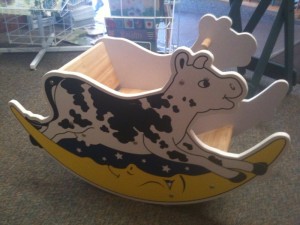 -Tracy (24 weeks pregnant with the worst heartburn in the world!!!)