Did you know that October is SIDS Awareness month? I vaguely remember each year recognizing it and I knew it had a month, but before this year I couldn’t have told you which month it was. As a mother I can tell you how aware I am that SIDS exists. It’s like that big white elephant in the room that no one wants to admit is there, but prays it won’t step on them. Then back in April my cousin and his wife lost their 6 week old little girl, Hope Adele, to SIDS. My heart continues to ache for their loss. I still have a hard time trying to wrap my mind around the amount of grief they are experiencing. Rachel is by far one of the strongest women I think I have ever met. She recently was posting on Facebook about SIDS and I offered my blog to her this month as a platform to raise awareness. She has bravely written the post below and another which I will share with you later this week. 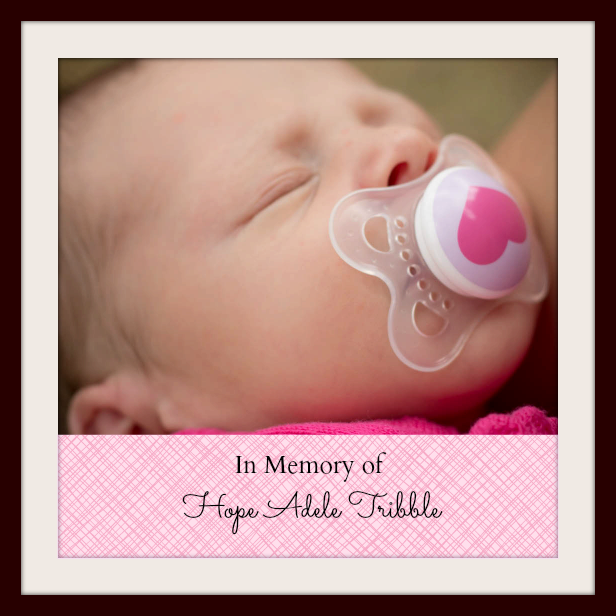 A Mother’s Journey: My experience with Open Adoption and SIDS.

My journey as a mother has been long and arduous. It’s also been wonderful and beautiful, filled with Joy. Filled with heartbreak. I have loved, nurtured, and given birth to two perfect children. Yet as I write this, I find myself in a silent house. There is no crying, no fighting. I would welcome these usually undesirable things.

It started 11 years ago, when as a student at Florida State University I discovered I was pregnant and single. But I fought the good fight. I made plans. I made arraignments for my son to be placed in a loving, spiritual home with a wonderful couple. We planned an “open adoption,” where I would receive letters and pictures on a scheduled basis. These best laid plans have changed…for the better. At four months of age, his parents asked me to play a larger role in his life, which I have accepted and see him regularly.

Being a pregnant student is hard, but returning to a new semester less than a month following his birth was freaking ridiculous. How can you fit in with the sorority girls and the carefree college life, when you have had this kind of experience?

I completed my degree and later went on to complete a Master’s Degree in Social Work, wanting to save lives and work with children.

Fast forward to one year ago-almost to the day, when I found myself pregnant again. My new-ish relationship and new found love was on the line. And so was my future. I was 30 years old, no longer a scared little girl (although I felt like one for a week or so!) Steven and I made the decision to have a child together. And a month later, I laughed and cried when he got down on one knee and asked me to marry him in what would become the baby’s nursery. “Let’s start this journey here. Let’s fill this room with love from the beginning.”

I said yes. We were married in a Catholic wedding in November of 2012, my 22 week bump expertly concealed by an empire waist.

In March of 2013, I gave birth to a perfect little girl who we named Hope Adele. Hope after the anchor for the soul, and my middle name…Adele after my Maternal Grandmother. We brought her home and placed her in that room filled with love.

Bouncing back did not come easy for me this time around. I had severe anemia which nearly required transfusion. There was no way I was getting back into my clothes anytime soon (unlike my first pregnancy, where I went home and was back in my jeans within the week) I felt awful. And oh yea, this time there was a baby who I was exclusively breastfeeding…so I was exhausted.

But we tried.
And we were succeeding.

I had everything I needed. A perfect child, the perfect husband. A perfect nursery, a perfect life. We were broke as a joke, since I wasn’t working, but it didn’t seem to matter. Her cute little butt was diapered and I made enough milk to feed her.

My husband enrolled in college so that he could finish up his degree and have a better life for us.

I finally was getting that “reward” that everyone had promised me over the last decade would come. Hope and her Daddy were Baptized together on Easter, and the church cried and shared in our joy.

Then, on the morning of April 25,2013, after dosing in an upright position in her nursery after a morning feed, I quietly crept out of the bed in that room to use the bathroom. Hope was still snoozing, so I placed her in the middle of the bed on her back. She was still in her swaddle, and I had moved all of the pillows and blankets to give her a safe spot. At 6 weeks old, she wasn’t a roll risk, so I quickly used the bathroom and was back in less than two minutes. As I pulled her close to me for a snuggle I realized…she is floppy. I quickly removed her swaddle and after checking for a pulse and breathing, I started CPR. I screamed a primal scream for my sister in law, Amy, who was visiting from out of state.

She came in and we worked as a well oiled machine, until paramedics arrived, carried me out of the room, and worked on my daughter.

My husband came home from work. I later learned that I called him. I have no recollection of this. People came. Police came. Someone scheduled me an emergency appointment with my psychiatrist (I have a history of depression and anxiety). Several hours later, someone packed us a bag. I would never again enter the house that our Faith, our HOPE, and our Love had created…not with her things in the house anyway.

They call it SIDS. Which means they have no idea what happened to her. No suffocation, no arrthymias…nothing.

We stayed with my mom for about a week and a half before moving across town. The house is still being prepped to sell.

So now I am lost. I am surrounded by boxes of things that mean nothing to me. They are just things. They are no longer important. I took a job as an Administrative Assistant. Sadly the pay is comparable to my former Social Worker salary. I never wanted to return to work. I lashed out at those who told me it would “be good for me to work. To focus my mind elsewhere.” I’m sorry, that’s bullshit.

I’ve learned that people want you to return to your normal routine because it makes them feel better if you are doing “normal” things.

I will never return to Social Work.

I want to set up this home that I have been unable to unpack.

I want to have the desire to make love to my husband.

I want to be able to cry, but the well has run dry.

I want to smile and mean it.

But most of all, I want Hope.

I don’t know why the Lord has led me down a path of consistently being a grieving mother. But I know he has plans for me and I continue to place my trust in him. My marriage is strong. The only problem we have is that we want to be around each other. All. The. Time.

I hope to one day have more children. I will follow all the rules of being the perfect parent, just like I always have. Mother’s come in different forms…I am a mother of two. You just don’t see that as an outsider looking in.

But I am trying.

And I will succeed.