Once The Flood Gates Are Opened….

At some point in my late teens I decided to toughen up and stop crying. I can remember lots of crying around the time my parents got divorced when I was seven. I remember lots of hormonal teenage sized angst filled tears around 13. More tears as classmates and family members passed away. There were too many of those during high school. Then more familial fighting and more family members passing away after graduating. And that’s when they stopped.

No more tears. I held strong for a year or two. Even lost a cat to some mean coyotes and managed to shed no tears. For me, the cat lady, that was no small feat. I experienced the trauma of a breaking and entering and other than the hysterics that resulted after looking up and realizing someone, who I did not know and was not supposed to be there, was standing in my bedroom doorway, no tears. Not even when I had to stand up in front of a crowded courtroom in front of the above mentioned stranger and answer the judges questions. Lots of shaking and sweating, but no tears.

Then my grandfather passed away. And there were so many tears. And it was so hard to get them to stop. But I managed it.

Turns out it wasn’t tears I was stopping. It was feelings. So when the tears stopped, so did the feelings. Turns out feelings are really, really important. They keep you from making mistakes. Big mistakes. Mistakes that cost a lot of money and involve other people. Mistakes that you can’t take back.

After making one such big mistake I had to tap into these feelings to pick up my broken pieces and with them came the tears. Luckily I had a professional to help me. I saw her once a week and she was awesome. At the time my sister, the other mother, was living overseas. The professional and I had tapped into a raw vein of my past involving more divorce and I explained how I never would have survived that had I not had my sister with me. That’s when the tears started to come. I could feel them bubbling up in the throat. It ached with the effort to hold them in and I succeeded. I had managed to hold all of this in, not one single tear, until I started to talk about my sister and realize that I was having to go through all this without her. My time was up and I left the appointment and immediately picked up the phone to call her Skype number in Romania. She answered and I immediately started to cry, and then the call was dropped. I would calm down, call her again, hear her voice and start to cry and then the call would drop. AGAIN! It was so frustrating that it was comical, I finally reached her and cried and talked to her and she cried. Then I stuffed it all back in.

That is until the day I married my soul mate. I stood out side the church with my girls surrounding me and I could feel those feelings started to bubble. I tried with all my might cram them back down. My best friend Kara even shouting out “FARTING LIZARDS, FARTING LIZARDS,” which worked for a bit out of sheer confusion. Do lizards actually fart? Had she heard a lizard fart? And by the way, I hate the word fart, it’s so crass. And she knows me well, which is probably why she said it. 🙂

Then as I walked down the aisle, tripping over the my dress not once, but twice! A flood gate opened and there was no holding it back. The feelings of joy and love and all of my dreams coming true filled me to over flowing and there was only one way they were coming out. Years and years of tears streamed down my face as I looked up into the very concerned face of Eric. The pastor just smiled at me and gave me a “you can do this!” expression, “just hang in there.” As I gasped for breath in between the choking sobs I could see the stunned faces of my aunt and cousin who were sitting on the altar waiting to share the scripture I had asked them to read. It was such an ugly cry and there was nothing I could do about it. But it was a good thing, I tried to smile through it, to reassure Eric that I wasn’t just catching my breath so I could bolt for the door. I would hold my breath, willing the muscles in my cheeks to rise into a smile, but my face would crumple and more sobs would escape.  I just had to ride it out. It felt like it lasted forever, but I’m guessing it was just a couple of minutes, maybe less. All I knew was that I REALLY wanted to marry this man, but I couldn’t get married if I couldn’t stop crying!! 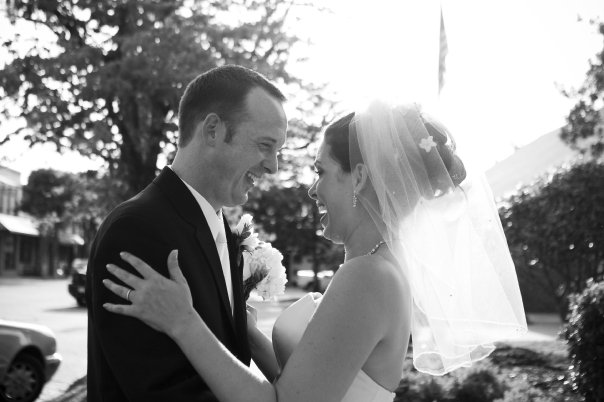 Now, ever since, I have not been able to hold the tears in. They just come rolling out whenever they feel like it! Now I realize that tears are such a good thing. Feeling is such a good thing. If you put up a wall, if you hide all those feelings deep down, you are going to be hiding the good with the bad.

To feel, you have to feel everything. You can’t pick and choose.