Pregnancy Brain…..What Happens to People When They Are AROUND Pregnant Women

****Warning, this is a serious rant. And the man child toddler asleep in his crib and these braxton hicks that I am having while writing this gives me the right to say all of these things. If you don’t like it, I really don’t care.*** 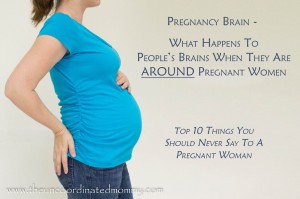 During both of my pregnancies I heard the same comments. First, they would ask how far along I was or when I was due. In the beginning I told the truth. Their eyes would get really round and that moment that separates smart people from assholes would come. Would they comment? Had God blessed them with a filter? About 85% of the time they would usually say, “Wow, you are so big!” or my personal favorite “My daughters due in June and she’s still barely showing!” How I would have liked to respond. “Wow, you’re really big too, what’s your excuse?!” or “That’s great that your daughter is skinny, but does she understand the social niceties as well as you do?” I don’t know, I guess I never said anything because everything I could think of was stupid. I almost responded to a “You’re going to have a big baby!” with “Actually, no I’m not, my baby is measuring right on schedule. My size that you are referring to comes from pregnancy constipation, which is pretty common, and causes you to build up gas and bloat, but thanks for noticing!”

Why do people lose all common sense around pregnant women? It’s suddenly OK to comment on our size, or touch us? I don’t think so! Let me provide you with the:

Top 10 list of things that you absolutely should not do or say when talking to a pregnant woman you don’t know and possibly some that you do…..

I would say use your judgement, but most people who think these things are OK, might be seriously lacking in that department. (Please anonymously forward this to those people)

Now, it is important to say that some of these things are said with the best of intentions, but that still doesn’t make it OK. It is important to respect each other and remember that while the golden rule, “Do unto others, blah blah blah,” is great in theory. We are all different and what might not have bothered you, could truly offend someone else and ruin their day. Now, with that being said, to those of you who read this and think, “Some people are just too sensitive,” and you know who you are, and I know who you are too. Have you ever thought that maybe the entire rest of the world isn’t too sensitive and maybe you could stand to be a little less insensitive??? And I am not just saying that because I am pregnant and have an abundance of hormones! LOL 🙂

So, here’s what I really want to know! What’s the craziest most insensitive thing that happened to you, or someone you know, while pregnant?? Come on, dish!

-Tracy (Noah is 17 months, and I am 24 weeks pregnant and feel so much better having said all that!) 🙂