All I Want For Christmas is Momnesia 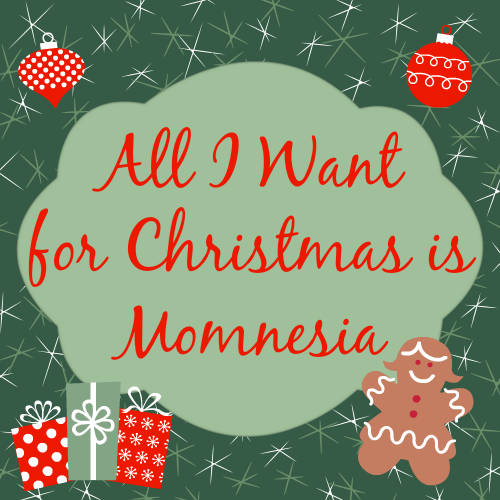 People were staring and honestly, I didn’t care. Bryce was like a lead brick on my side and had decided he was bored with his brothers antics and wanted down. He was busy launching himself away from my body trying to plummet to the ground so he could no doubt find something nasty on the parking lot ground to stick in his mouth. Meanwhile Noah was refusing to help me undo his car seat and I was limited to just the one hand due to the 25 lb jumping bean bouncing in my other arm.

Why on earth had I decided to get him out first? Noah continued to stubbornly insist that he did NOT want to go in the grocery store. I finally managed to loosen the strap and unbuckle him before snatching him out of the seat and the car, probably a little too forcefully, but at this point he was going to be lucky to escape a good swat or two on the behind. I had just about had enough of his behavior.

Bryce was continuing his calisthenics so instead of reprimanding Noah I shut the door and rooted in my pocket for the key fob while hissing at Noah to stand still. He of course did not listen and tried to walk away, I grabbed at his jacket and he whipped around and yelled at me, “Don’t do that Mommy!!” “Then don’t walk away from me in a parking lot”, I snapped back. At this point there were about a half dozen or so people watching.

I grabbed his hand and started dragging him towards the store. He continued to flail and cry the entire way. I was trying not to make eye contact with our audience, but sometimes it’s impossible. There was the old man looking at Noah with disdain and I could almost hear the words “Back in my day kids…..” emanating from his thinning scalp. The middle aged woman who stopped her car so we could cross gave me the “Oh I know it seems bad now but aren’t they worth it smile.” I’ve decided these kind of people have selective amnesia, they have blocked out all those traumatic experiences from their early days of parenting. Lucky bastards. I really hope to be one of them one day! We headed inside and of course all the double carts with the steering wheels were being used. Noah started up with renewed wails of protest over having to sit in the main part of the shopping cart as I hefted Bryce’s massive butt into the front of the cart and locked him down. I immediately felt better, at least a little, and was able to persuade/threaten/bribe Noah into calming down so I could focus on my shopping. The cans of pumpkin filling for my pies were right at the front, thank you sweet baby Jesus, so he was soon happily stacking towers in the cart. Surprisingly that was it for Noah’s tantrums! As quickly as they had started they were gone. It was like  flash fire, now you see it – now you don’t. All that was left were my singed nerves.

Bryce however decided that I needed to be tested a little more and proceeded to throw his books from the cart every five feet and lunge for items on the shelf every time he was within arms length of a shelf. Given that it was days before thanksgiving and the store was packed and he has the arm span of a 3 year old this was VERY often. We somehow, by the grace of God, managed to get everything we needed, stop by the bakery for cookies and headed for the checkout counter only stopping once to pick up a singing/dancing Santa Claus. It was an impulse but to watch their faces light up when he started dancing almost made me forget the earlier tantrums. Almost. God must have figured I had had enough tormenting for one day because both boys quietly munched on their cookies and stared like zombies at the dancing Santa while I checked out. Yeah I might have had an ulterior motive in purchasing him.

After making it to the car I was trying to buckle Bryce as he continued to lunge toward the black hole that exists in between the two car seats, no doubt reaching for either a toy, a binky or a long lost sippy cup whose contents were probably no longer recognizable. Out of the corner of my eye I saw a woman quietly waiting for me to finish so she could get in her car. I mumbled an apology and pulled tighter on Bryce’s straps with renewed vigor. She insisted I take my time and as I turned around I could see the look in her eyes. The knowing look. The “Oh man I have so been there and I wouldn’t wish that on my worst enemy look.” She smiled and said not to worry, that she remembered those days, oh man did she remember those days. I laughed glancing at her teenage daughter behind her thumbs flying over her phone completely oblivious to our interaction. She wasn’t silently urging me to enjoy these moments while they lasted. It was just a moment of shared understanding that made me realize that this won’t last forever but then I will have something different to look forward to.

I’m probably going to be more like her. I don’t think I will ever be able to completely forget these days. In 10 years I will probably run across some poor frazzled mother toting along small kids, dangerously close in age, and offer to go clean her house or something.