This morning started off really early. Around 1AM when Bryce decided to wake up crying. He doesn’t eat in the middle of the night anymore, I FINALLY managed to get him to stop doing that within the last month. Noah stopped eating in the middle of the night when he was 9 weeks old, Bryce was 12 months old! So he wakes up and won’t go back to sleep, I give him a minute or so to try and settle himself, no such luck. I go check on him and his diaper is dry so i just lay him back down and give him his binky and cover him back up. He starts crying again before I even make it back to my room. This goes on and on and on until almost 2AM. I would let him fuss for a bit and then go try to get him to lay down. One time I gave him gas drops, another time some Tylenol in case he was teething. Nope, didn’t help. Finally? I fed him. Yup, it worked. He passed out and slept till 7:40. Little stinker.

Tuesday are school days. I try to wake up around 7AM so I can get dressed and make the boys lunches and breakfast before waking them up. Today of course I was tired from being up with Bryce so I snooze until 7:30. I’ve barely brushed my teeth and Bryce is already crying. I quickly throw on my clothes for the day and go get him dressed. I keep a bunch of toys under my bathroom counter for just such an occasion. He also likes to pull everything out of the drawers too. Bryce plays while I finish getting ready. 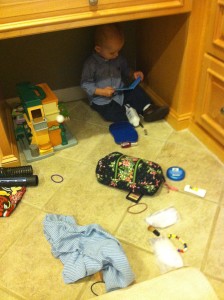 Today isn’t just a school day, it’s Picture Day!! I go to wake Noah up and he is in a FOUL mood. This is not good, because by now we are in a hurry. I try all sorts of things to get him in a better mood and then I remember that Ranny (my mom) left some lolli pops downstairs in the kitchen. I promise Noah he can have one after breakfast. I am so not winning mom of the year today. 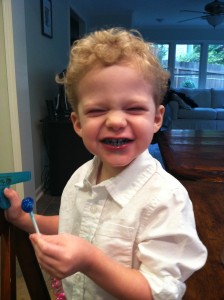 Oh, did I forget to mention they were blue lolly pops!?! Thanks Ranny! 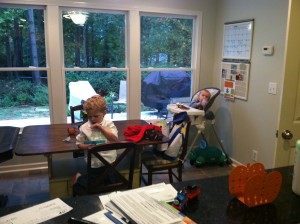 The kids eat breakfast while I make their lunches and grab my breakfast (a cereal bar) and get everyone in the car. I drop the boys off at school, missing the car drop off by five minutes, so I double park and run them inside. Then it’s off to Crossroads Community Ministries to volunteer in their soup kitchen. There is nothing more eye opening than volunteering in a place like this. It is heart wrenching. Today their was a 7 month old baby with his parents. That hit me hard. It literally made my boobs hurt. I haven’t had to wear breast pads in 6 months, but I was worried I was going to need them today. Apparently when you become a momma, you become a momma to all babies in need. 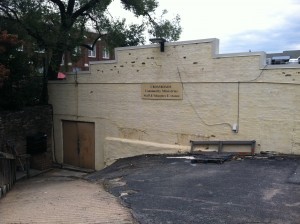 This was my first time volunteering since we moved to Atlanta. I really miss helping people. When I was in Jacksonville I worked for a non-profit. It was the most depressing but probably the most satisfying work I have ever done. I am already pulling together old baby blankets and clothing and crocheting scarves to drop off later this week. 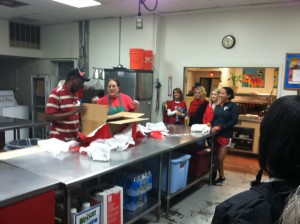 I was volunteering with the Falcons Women’s Association. It is made up of the players, coaches, and associates wives. We helped prepare and serve the food and also donated 60 new aprons. Black and red of course. 🙂 After volunteering I grabbed Chick-Fil-A and picked the boys up from school. We headed home and Bryce went straight down for a nap and Noah watched Cars 2 while I worked on the computer. Towards the end he was getting sleepy and cuddly so I joined him and we snuggled. 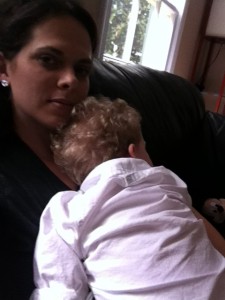 He doesn’t do this much anymore so I take every opportunity I can. 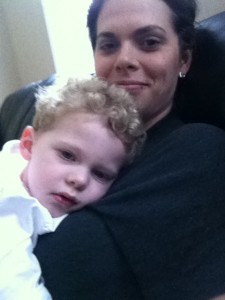 During naptime I continued to try to clean the house. It feels like a never ending battle. I am always cleaning, yet the house is never clean!!

Noah was equally lazy after his nap so Bryce played in his room as he wallowed in his bed for about 15 or 20 minutes. We finally got the lazy bones out of his crib and downstairs. The boys played in the playroom and I finally sat down to relax and watch a little HGTV. I am slightly obsessed with Property Brothers and Love It or List It.  🙂 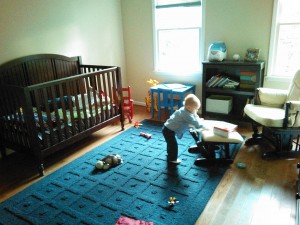 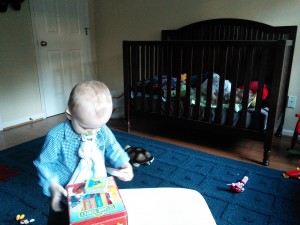 For dinner we had a frozen pizza, just thought I would continue the quest to become mom of the year. After dinner we had a small potty party for Noah and Bryce decided to join! To my credit I am not sitting on the floor of the bathroom there is a small step stool under me. 🙂 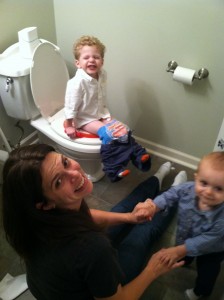 After our recent move, and some constipation problems, Noah has completely regressed and refuses to use the potty. This was a HUGE deal tonight that he sat on the potty. TWICE! He also sat on the upstairs potty right before bed and we sang church songs. Like 10 of them. 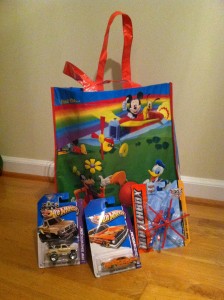 It probably helps that I promised to give him the helicopter out of his pottytraining prize bag if he would just pee in the potty. Normally he gets a sticker every time he goes potty and once he fills up his chart he gets to pick a prize. The bag is full of 99 cent hot wheels and planes etc. Now because of the regression he gets to pick if he just goes in the potty one time. My expectations are soooo low right now. He didn’t actually go in the potty tonight but I am very happy he at least tried! 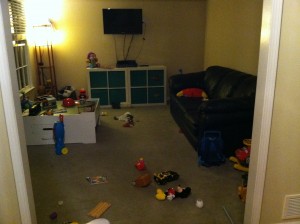 After our potty party Eric and I decided to clean the playroom. Instead we got side tracked and rearranged the playroom, thereby making an even bigger mess. We still have so much left to do until I am happy with this room. I want to paint, I need to hide those wires under the TV. I also eventually want to replace that couch. It’s way too big for the room. It was our old couch though, and it’s honestly perfect for two small boys, easy to clean! 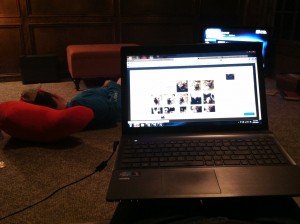 Because I was hanging out in the upstairs bathroom singing church songs while Noah was NOT peeing in the potty I was 15 minutes late hosting the #pottytrainingchat I do on twitter every Tuesday night. Kind of ironic huh! I made it downstairs and held the chat and wrote this post while Eric passed out on the floor watching Seinfeld.

Another thrilling night in the Kistler household.

PS – Notice our TV is on the floor and we have no furniture in the room?? We are getting our entertainment stand on Friday!! Woo Hoo!! Can’t wait, Bryce was wiping his cheesy cracker hands all over the TV tonight and I thought Eric was going to have a coronary! Now we just need some chairs so there is somewhere else to sit besides the couch. One thing at a time.