Who Are We Hiding From? 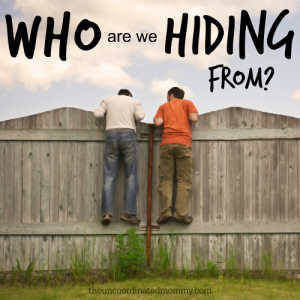 When I was growing up in a small town in North Florida, privacy fences didn’t really exist. At least not to the extent they do now a days. We had Old Man Mr. Scruggs on one side with a decent hedge to provide separation and Jane and Henrietta on the other. Old man Scruggs kept his yard in nice shape and other than occasionally almost burning down our house with his “controlled burns” of the field behind us, he rarely gave us any trouble. Now Jane and Henrietta were another story entirely. They were a mother daughter duo and, well, their house and yard put Sanford and Sons’ to shame! They were what I would describe as mountain folk, even though we were a good 7 hours from the closest mountain. They were nice to my mother when she was a young girl and my sister and I when we were growing up too though. We all cringe when we think that we actually used to eat cookies and drink tea in their house though, it was that bad. There was a somewhat more substantial fence along that property line so I completely understand that privacy fences have a place and purpose.

Long before I met Eric, while in college, I lived in a house that had a privacy fence. Most lots around there were less than a 1/4 acre and perfectly square pieces of land. No one really knew each other and everyone seemed pretty happy with that. That was until the peeping Tom showed up in our neighborhood. Those privacy fences that you would think are supposed to make us feel hidden and safer? Yeah, they actually do the opposite. That privacy fence in my backyard made it possible for that boy to roam about in my backyard without any fear of being seen by my neighbors. It allowed HIM the privacy to open the side door going into my garage and enter into my house while I was home.

I was lucky (if you can call it that) that he was a very confused and thankfully easily frightened 15 year old boy who was promptly chased out of the house by my ex and his 60 lb pit bull. I still suffer from what can only amount to some form of PTSD from this incident.

Fast forward 11 years and my husband and I have been discussing removing an old chain length fence that runs along our property. I am emphatic that I DO NOT want a privacy fence installed. We already have one between us and the house to our left and that’s it. I want a fence, but I would rather it be a low picket fence with plenty of visibility. I have nothing to hide and I want to know that if my neighbor sees someone walking around behind my house that they can call me or the police, and vice versa. If we want to walk around our house naked we will just have to close the curtains. Poor us. Privacy fences give you a FALSE sense of security.

Community seems to be what we are missing most these days. If you don’t know your neighbors how will you be able to tell if that person you see walking around your neighborhood is supposed to be there? I get it, it’s not the fifties. We live in a different world where this isn’t always possible, but this should be what we strive for when it is. And if you have your own Jane and Henrietta living next door? Well, that’s what privacy fences are for, there just isn’t any need to box yourself in.

Do you have a privacy fence? Do you want one?