The Night A Roach Saved My Sister 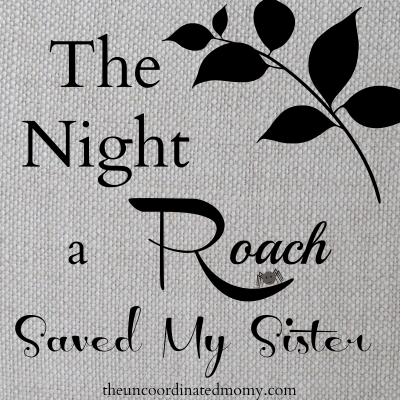 Florida may be known for it’s beautiful beaches and sunny weather, but any Floridian will also tell you that we have some infamous bugs. Particularly, the palmetto bug, or roaches as most other people know them. Our roaches are so big that they need a whole new name. Oh and some of them fly! Notice I say some, not all. That means as you are walking up to one, or trying to sneak around it if it happens to have you cornered in your bathroom, you have no idea if it is going to literally sprout wings and fly or scurry off as fast as it’s nasty little legs can carry it. And if roaches aren’t bad enough we have HUGE spiders, snakes, and alligators. Although any true floridian knows that gators are the least of our worries. Just leave them alone and stay away from their nests and should be just fine. Now your little yap yap dogs might want to stay away from the edges of ponds and lakes though, that ‘s a while ‘nother story.

My sister and her family live out in the middle of no where in North Florida. Seriously, people keep spotting a bear in their neighborhood. She’s concerned about her own little yap yap dog, a westie, because not only is the bear of concern but their are also panthers, coyotes, eagles, and of course snakes. Really I’m beginning to question why she allows her outside – ever. She has even stood over Rory while she does her business waving her arms at circling birds, going “Get away! shoo!”  What I am picturing in my head right now is so freakin’ funny I am going to split my side laughing. Oh and did I mention Rory is from Romania?? That poor culture shocked dog.

So the other night my sister, the night owl (oh yeah! and she probably has to worry about owls too!), was sitting in her living room with all the lights out watching TV one night. Her husband was away on business so it was just her, my nephew Thomas (who was sleeping), and Rory the Romanian dog. As Jamie was watching TV she heard a strange *thunk* and something dark flew from the fan across the room. Having no idea what in the hell had just flown across her living room or where it had gone she immediately jumped and turned on every light in her house. As she was turning on lights she noticed a HUGE spider on the floor between the living room and kitchen. I’m not just talking big, I’m talking North Florida rural big, like the size of your hand big. It was most likely a wood spider. I refuse to put pictures of creepy crawly things on my blog, so you can just head on over to Google and search it yourself if you really want to see what it looked like. They are basically huge, hairy spiders. Jamie said that it reminded Aragog the giant spider from Harry Potter, LOL. She may have been overreacting just a tad, but I can assure you it was big. These things are pretty common here and they are not cool. She climbed up into the nearest chair with a shoe and lobbed it over at the massive spider. Apparently it was a direct hit because she saw some it’s legs pop off at the moment of impact. Ewww!!!

After dispensing with the spider she continued searching her living room. Unless wood spiders had started to fly or jump long distances, and God help us all if they ever do, she knew that something else had hit the fan and needed to continue her search. She managed to find ANOTHER small spider on the other side of the room and killed it too. She figured the only way whatever it was that hit the fan  would show itself again was to turn off the lights, so she bravely turned the lights back off and went back to her chair. She vigilantly resumed scanning the room in the dark while watching the rest of her show. As she was glancing about she noticed something take flight across the room and slowly, like a wounded airplane with a drunk pilot it was pitching, yawing, and rolling across the room on a collision course straight for her. As it got closer she clambored from the chair and ducked and lunged across the living dodging out of the way in the nick of time. She still had no idea what it was and once again couldn’t find it! She again turned all the lights back on and ran to get the wasp spray. She didn’t know what it was, but was positive that wasp spray should take care of it. As she searched the room, again, she finally found it. A roach. It rolled off of Thomas’s, Thomas the train toddler couch, and lay still on the floor. She doused it with the wasp spray and it shuddered and shook before finally laying still.

While the thought of a flying roach is definitely NOT something she is OK with, if it hadn’t been for it that nasty wood spider could have been lose in her house with out her knowing it. Hopefully she gave it a 21 flush salute for it’s service on the battlefield that night.