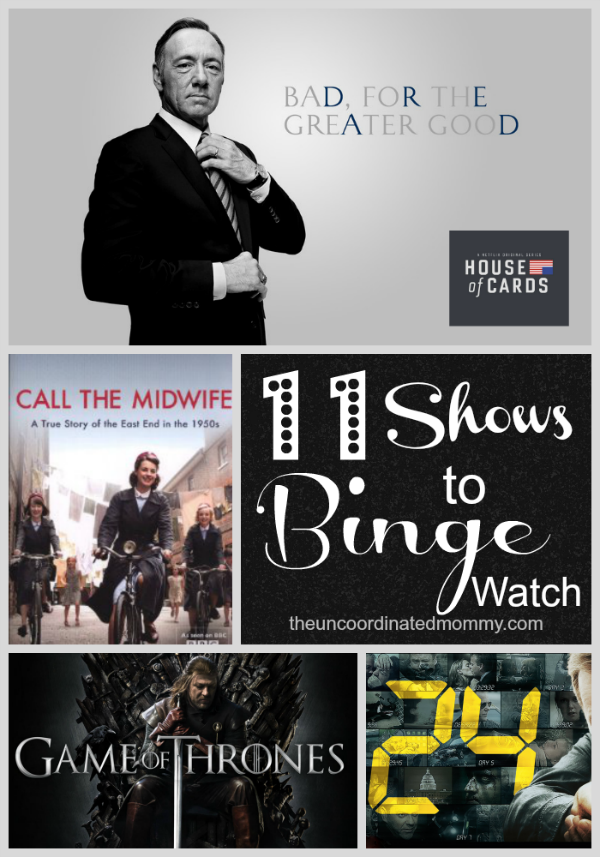 Binge drinking, binge eating. These terms apply to disorders. Well if that’s the case then my husband and I share a disorder along with probably most of the country, we binge watch T.V. shows. Here are our favorite shows that we have binge watched over the past 7 years. I’m going back that far because if you didn’t watch them then you can definitely find them on Netflix or You Tube or some other online avenue now.

Also, I have only one criteria for labeling something as binge watching. If we utter the phrase,

“Ok, just one more episode and then we’ll go to sleep”

then it classifies as binge watching.

We have recently made a new rule that we only watch 2 episodes a night, and maybe 3 on the weekends if we can’t help ourselves. We also take a little break in the middle of episodes to move around a bit. Apparently binge watching is bad for your health!

This is probably our most recent, favorite. It has sex, murder, and political intrigue. It will make you hate politics but love the drama involved. And Kevin Spacey is awesome!!!

This is what we are watching right now. We watched season 1 in three days and we definitely don’t watch it until the kids are asleep. Way graphic! It reminds me of the Lord of the Rings but the setting is a little more rooted in historical truths. Very medieval, but also contains dragons etc. Only downfall is you have to have HBO (or know someone who does) to watch the shows on their HBOGO app.

This was a great show and since they have finished shooting this, you can watch it from start to finish. It takes your stereo-typical high school chemistry teacher and makes him a drug dealer. Very funny. And trust me that is not a spoiler, there is way more to it than that.

I still recommend this, even though we didn’t finish it. We made it up until they took a break when the lead actor became sick. We just never jumped back on the wagon after that. Very gruesome, but great if you like crime thrillers.

This was our first experience in binge watching. We were newly engaged (so no kids) and we would stay up till 2 AM watching these episodes even though we both had work the next morning. Highly recommend it. Even though the ending took a lot of flack I still enjoyed the entire show.

Love me some Jack Bauer! We have had a hard time seeing Kiefer Sutherland in any other shows since then though. LOL We are always saying, “No, no, no Jack Bauer would never have done it like that!” Warning, while the first season was fun to watch (we started watching during season 3) the quality is a little lacking. We were able to pause it and see camera/tech people hiding in the bushes and saw a couple of boom mikes falling into the frame as well. We had already fallen in love with it though so we didn’t mind.

I put this show in the modern stupid funny category. You kind of have to channel your high school/college dumb sense of humor self to watch this show. LOL

We have never binge watched this show, but that is only because we have watched every episode as soon as it has aired! Love it! If you have never seen this, go back to Season 1 and start from the beginning.

I could probably get Eric to watch this, but it’s not really his kind of show. I, however, love it!!! The british dry whit is definitely not lacking and the costume and set designers are geniuses!!

This definitely was just a show for me. I doubt many men would want to watch this show, but considering the birth of our first child left Eric somewhat traumatized I never even asked him to. The story is set in the East End of London during the 50’s and follows the experience of a young midwife. I was watching an episode one time on my tablet and Eric walked in as a woman was screaming in the throws of labor and I swear his face went white and contorted in horror as he asked, “What in the hell are you watching??” LOL Ironically, even though the infant mortality rate was high and the manner in which women gave birth in the East End in the 50’s was somewhat horrifying, this show can make you want to have babies. So if you have baby fever you have been forewarned!

11. Orange is the New Black

We have not watched this show, nor do we plan to. But it is apparently very popular and falls into the binge watching category often. I am only including it because I couldn’t resist sharing that my poor husband and my mother accidentally watched the first episode of season 1 of this show together. I have never seen it, but apparently there is some rather graphic girl on girl action and Eric said it was EXTREMELY awkward. Neither of them had any idea that the show was like that. LOL

What are your favorite shows for binge watching??