Ok, so first I’m going to recount my own experience with breastfeeding and then I’m going to tell you what I wish I had known and what I would have done. They say that hind sight is 20/20 so I am going to let everyone learn from my mistakes. 🙂

I was lucky in that I was able to breastfeed Noah almost immediately. We made sure that as soon as the nurses cleaned him up and weighed him and after I had been taken care of I took about 10 minutes to practice feeding him for the first time. We did this before anybody was allowed in the room. I think that it was very important to do this without any distractions. Eric went out to the waiting room to give everyone the good news and it was just me and my nurse Diana, who was wonderful by the way, and Noah.

We tried the football hold first, then the cradle hold, and finally were successful with me laying on my side and Noah lying on the bed next to me. I was getting a little frustrated but Diana explained that I needed to relax in order for it to work and that if I tensed up it would make Noah tense up as well. This information became very helpful later on.

He ate for about 10  minutes and then fell asleep and I swear he pretty much slept for like 3 days! We kept trying to feed him every couple of ours and he did eat a couple of more times, but from about 3am the first night until about noon the next day he wouldn’t wake up enough to latch on. Everytime the nurses would come in to check on us they would ask if he was eating and I would say that we were trying. Finally my new nurse Martha asked when the last time he had eaten was and when I told her 3am she said we had to wake this baby up and feed him. 🙂 So we stripped him down to his diaper and tickled him and picked at him until he got mad enough to wake up and latch on. He FINALLY latched on and it kind of hurt, but it had taken so long I didn’t break the latch and make him try again. That was a huge mistake. I know I may get  a lot of flack for saying this, but if it truly hurts then they aren’t latched on properly. That is the honest truth. I was definitely sore, uncomfortable, but he only times it really hurt was because he wasn’t latched properly. That day that I let him latch on wrong he actually sucked so hard that he cracked my nipple and it even scabbed. So that meant for the first week or so of breastfeeding I cringed everytime he latched on to my right side.

1) Make sure to breastfeed as soon after your baby is born as possible. Sometimes extenuating circumstances may prevent this, but if possible give it a shot. Also, make sure that you have little or no distractions and your nurse or lactation consultant is there to help. I had taken a breastfeeding class and read up on it a lot, but I told Diana that I had no idea what I was doing and she helped me step by step through the entire process.

2) Stay Calm! Ha ha, I had to throw that exclamation point in for irony. 🙂 But seriously, the calmer you are the calmer your baby will be. Calm babies can focus better and latch on easier.

3)Ensure that your baby is latching on properly. The more they latch incorrectly the more your breasts will hurt and the harder it will be to nurse them in the future. It starts a cycle that is really hard to break.

So we had finally figured out the basic latch and Noah was getting lots of colostrum. And then my milk came in……

This was probably harder than the sore nipple, which actually hadn’t completely healed. As soon as my milk came in I became engorged. I had read where women described their breasts as boulders and I laughed, but there really is no other way to describe it. My boobs were so huge and stretched so tightly that Noah couldn’t latch on. The harder it was for him to latch the more frustrated he became, which made him cry, which made me cry, which upset him. It was a viscious cycle. Everytime I would sit down to feed him I could feel my entire body tense up preparing for battle. I have never experienced anything so frustrating. I called a lactation consultant to try to figure out what to do, I read different websites, but I was still unsure what to do. I finally found that a combination of warm washcloths to soften things up and a little bit of pumping would make it somewhat easier for him to latch on and if that didn’t work I used a plastic nipple shield, made by Medela, to make it easier for him to latch on. It almost worked like his pacifier in that it calmed him down and released some of my milk so that my “boulders” would deflate enough so he could latch on without the shield. I have to stress that the nipple shield should really be used as a last resort. Noah ended up getting a little addicted to it and became quite lazy. Once engorgement passed I had to wean him off of it and it wasn’t fun. Apparently, the shield can prevent you from receiving adequate stimulation and eventually can affect your milk supply.

During my most stressful moments, which was generally during the middle of the night, I found that the biggest problem  I had was calming my impatient little son down before he could eat. He would go from zero to hungry so fast it would make my head spin. And lord help us once I uncovered my breast, he would get so worked up that he wouldn’t hold his head still so that I could line him up. My milk would be leaking everywhere and he would be crying and then I would start crying, it was horrible. Then one night out of shear desperation I started a little ritual that saved us both. I sat there with Noah in my arms, leaned my head against the back of the glider and took deep breaths and rocked. I held Noah in my arms with his pacifier in his mouth and started repeating “Dear Lord, Please help baby Noah stay calm so that he can get some food in his belly.” I would say this to Noah while rocking until he finally calmed down. And then I would tell Noah what I was going to do next. “Now Mommy is going to unhook her bra” and he would start to get impatient and worked up and I would stop whatever I was doing and repeat “Dear Lord, Please help baby Noah stay calm so that he can get some food in his belly.” Until he calmed down again. That first time it probably took me 30 minutes just to get him to latch on, but when he finally did, it was the most rewarding thing in the world. The last step was to take the pacifier out of his mouth and instead of immediately trying to shove my boob in his mouth, I just rocked and repeated until he calmed down and then I was able to help him latch on.

That became our ritual and it worked like a charm. 🙂 If you can stay calm and talk to your baby with a soothing voice they will eventually calm down too. Trust me, it wasn’t immediately and it took patience that I never knew I had, but it finally worked.

Ironically, this ritual was born out of extreme frustration but will probably be one of my most cherished moments from those first weeks after Noah was born.

Noah is now 5 months old and we spent Mother’s Day yesterday at the beach. This picture was taken right after I breastfed him while sitting on the beach with that blanket pulled over my shoulder. 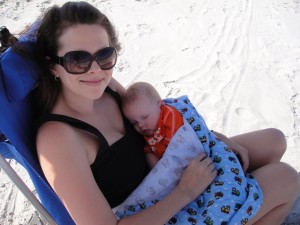 See, it gets much easier!!  I definitely had to have my boppy with me at all times for the first three months and I still prefer to use it if possible, but I’m finally comfortable feeding him pretty much anywhere.

What do I wish I had known? Well, for starters I wish I wasn’t so afraid to use my pump. I think I read somewhere that the more you pump the more your body will think that you need more milk  than your baby can eat. Well, now I realize there really isn’t anything wrong with that. If you have an abundance of milk and need to release some, by all means do so and start stocking your freezer!! Also, I wish I knew about the nipple shield earlier but at the same time knew that Noah could get hooked on it. It was definitely a blessing, but it ended up kind of being a curse too. If I had to do it over again I would still use it and definitely sooner for my sanity, but maybe not so often.

Hope all this helps!!