We had a fabulous time making Bryce’s 1st birthday party! If you’re looking for zoo birthday party inspiration, this will give you a lot of it! 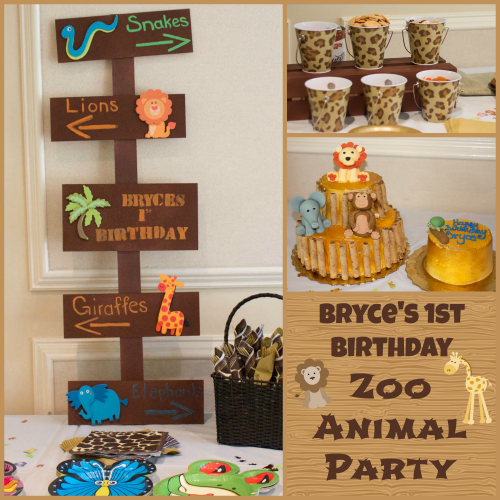 So Bryce’s 1st birthday zoo party has come and gone. We were crazy enough to hold his party the week before we closed on our new house, but NOT crazy enough to have it at home. Luckily our wonderfully amazing church let us have it in one of their rooms. Love them!! Here are all the fun things I came up with for his Zoo Birthday Party. 🙂 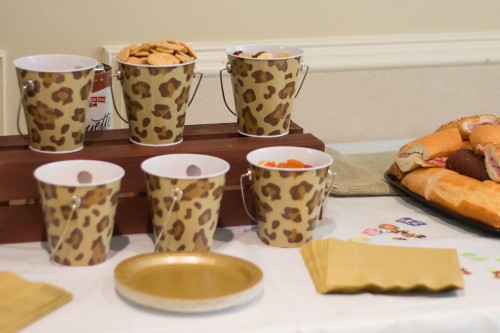 Animal Food! Had I some extra time I would have put a little sign here that said “Don’t Feed The Animals” 🙂 I picked up the mini pails from Walmart and the small crate from Joann’s! 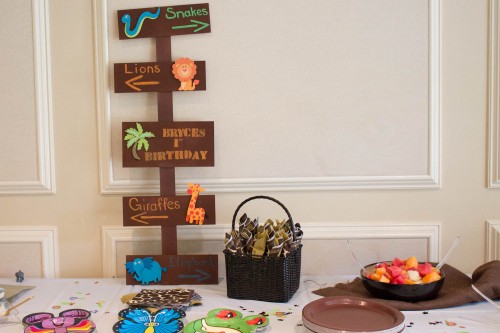 I made this sign using materials from Joann Fabrics. Just go to the aisle with all the wood stuff 🙂 The little animals are pre-painted and I just used a really strong glue to stick everything together and stencils for the lettering on the center board! In the future, I will use stencil adhesive or this would be the perfect opportunity to use a Silhouette. I still want one so bad!!! 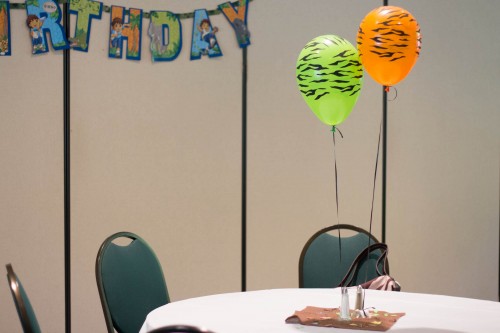 I actually used a Diego Birthday Banner, which has kind of a jungle theme. I also ran out of balloons. 🙁 I probably would have put about 5 per table to add color to the room, but we ended needing a ton to help people find the room. I found these animal print balloons at Walmart. 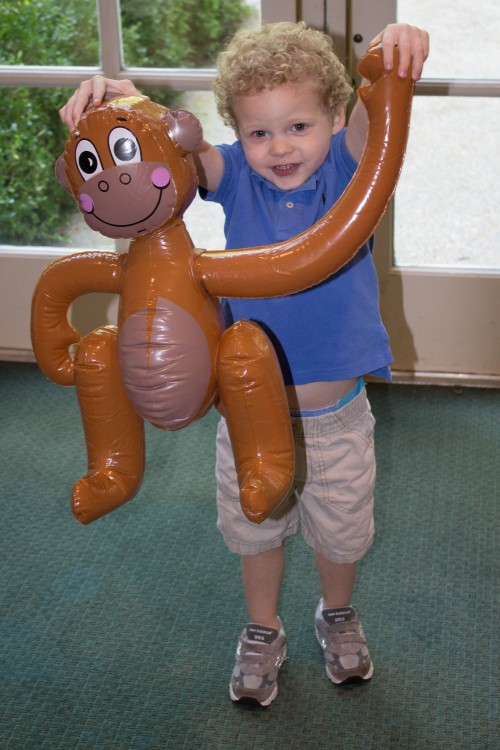 I ordered 6 of these adorable inflatable animals from Amazon and put them in the corner of the room with this PettingZoo Sign. 🙂 By far the biggest hit of the party!! Make sure to order plenty, the kids loved playing with them and you want more than enough, I wish I had ordered the pack.

I used plain paper bags with labels that I printed myself on clear labels. 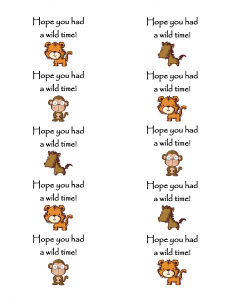 You can download the Zoo Animal Party Favor Labels here. And I also ordered these foam animal masks from Amazon as well. The bags were filled with small animal figurines and other small favors I found at Party City, perfect for a zoo birthday party! 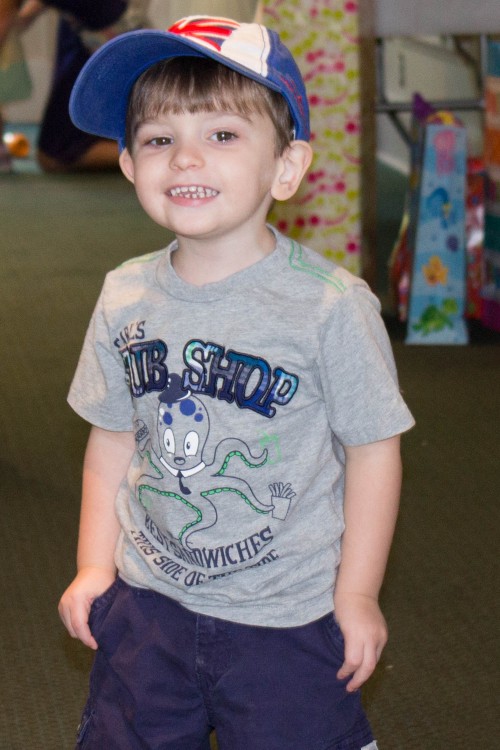 Just a super adorable picture of my nephew Thomas 🙂 Isn’t he just the coolest 2 year old!? 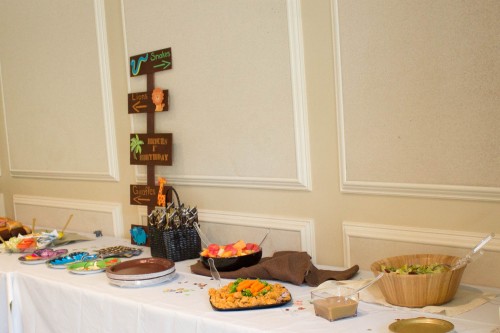 I tried to find wooden serving bowls, I bought the salad bowl at Walmart for $9 and will be able to reuse it! We also added scrap burlap fabric to the table for added color. And I used the disposable animal plates from the grocery store in addition to brown plates from Party City. 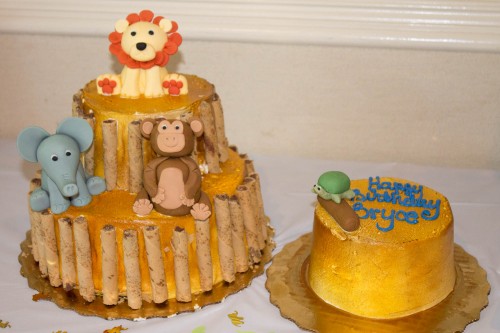 I have a love-hate relationship with this cake. I absolutely adore the little animals I made using the YouTube videos. HOWEVER, I ordered the cakes themselves from Publix, which makes awesome cakes. Seriously! They made my wedding cake and it was beautiful. Unfortunately, for whatever reason, my cakes were not ready to be picked up the morning of the party. I had to wait while they were iced. I was going to cover them with graham cracker crumbs to look like sand and surround with the chocolate hazelnut sticks (like above) but since I was running out of time due to the wait, I had them spray the icing to look like sand. Big mistake! Where the sticks touched the icing you can see the white icing coming through. It’s nitpicky I know, but I spent a lot of time on those little animals! In the future, I will either dye the icing and cover with crumbs, or use fondant or something. On another note, the little animals weren’t that hard to make! I used gum paste and kept them safe and covered in my Wilton cake caddy. Because I used gum paste I was able to make them weeks before the party!

I started by making a tester elephant using this video. He was for practice and getting used to working with the gum paste.

Then I found this lion video. And I loved making him!! The video is very detailed. I think it’s actually 3 parts, but this is only the first part. At the end, there is a cake with a monkey and elephant along with this lion. After looking at a million videos, I eventually froze my screen on this image and using techniques similar to the lion and elephant videos above made the elephant and monkey.

I made each animal in one evening, but it was spread over about 3 weeks. Then, just for fun and because I didn’t have anything better to do – you know, like pack – I decided to make the little turtle on the log. 🙂 Also if you are planning on making some animals from gum paste or making a birthday cake, in general, I highly recommend Wilton’s Cake Decorating Classes, they are offered at most Joann’s, Michaels, and Hobby Lobby locations. I took the first two courses and I have been way more comfortable when working with cake things. Here’s an old post from when I took the courses when preparing for Noah’s first birthday party. 🙂

I hope you guys enjoyed this post. I had a blast planning Bryce’s zoo birthday party! And in case you think I am absolutely nuts, don’t worry, I don’t go quite so overboard for future parties. For Noah’s second birthday party I basically wiped out the Lightning McQueen aisle at Walmart and called it a day. 🙂